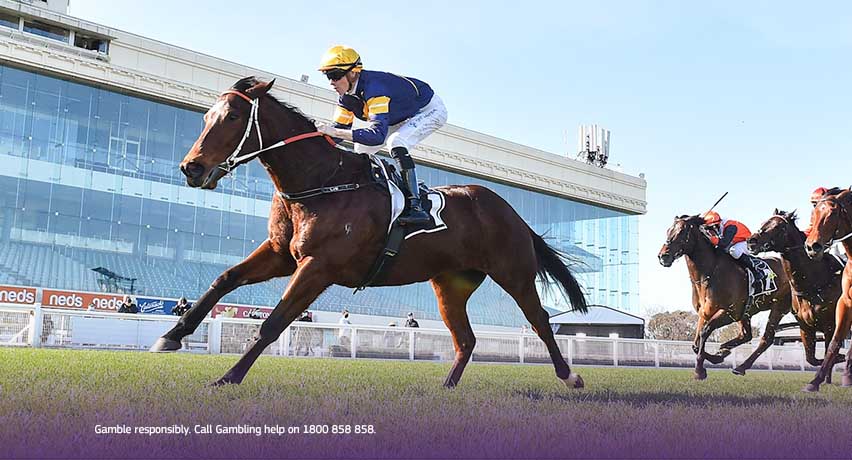 My number one seed strengthened his claim for the 2021 Everest with a stunning first-up win at Caulfield. That franked his sensational trial and it’s clear to me that he’s the horse they all have to beat. Already has a confirmed slot which allows Team Hawkes to perfectly program how they get him there on Grand Final day. Expected to line up on Saturday in The Shorts (1100m).

The defending champ is back at headquarters under the watchful eye of master trainer Les Bridge. A failed stint in Hong Kong is now well behind the six-year-old grey gelding and his grand final this spring will be The Everest. Last year’s electrifying win is carved into the memory of punters and with a confirmed slot I’m confident he’ll be right amongst the thick of it again come October 16. Looked ominous winning a Randwick barrier trial on Friday.

With a confirmed slot will it be third time lucky for the hulking chestnut? Sizzled to victory first-up in the Concorde Stakes (1000m) in a warning to all rivals – he’s back! With six Group One wins in the bank, the ability to handle all types of going and speed to burn – he looks the perfect Everest horse. But he’s unplaced from two previous Everest attempts which cannot be completely overlooked. Scheduled to run in The Shorts (1100m) on Saturday.

The new kid on the block is about to face his toughest campaign to date. Five wins from six starts and graduated to Stakes grade with a dominant Listed victory prior to going for a spell. A recent Randwick trial win and a close-up second behind Classique Legend on Friday show that John O’Shea’s five-year-old is ticking along perfectly and with a confirmed slot in The Everest is going to keep his better-credentialed rivals honest. Anticipated to kick-off his preparation in The Shorts (1100m) on Saturday.

The hope of Queensland and grabbed a spot late last week. An absolute flying machine, trainer Rob Heathcote has nursed his star sprinter back into health and judging by his trials up north – is back to his best! And his best is scarily good. Won the Group 1 JJ Atkins as a two-year-old before making a mess of them in the Run to The Rose (1200m) prior to succumbing to injury in the Golden Rose. Carries plenty of X-Factor into this year’s Everest puzzle. Expected to resume at Randwick on Saturday in The Shorts (1100m).

This lightly raced eight-year-old arguably carries the best recent form of any galloper heading towards the Everest and was confirmed as a starter during the week. Picked-up two Group 1 wins from his past three starts before going for a spell whilst also setting a track record outgunning Nature Strip to claim the Challenge Stakes (1000m) during the autumn. Best known as a wet tracker but can certainly go on the dry. Finished a controversial 11th in last year’s Everest but if he gains a slot will finish much further up the ladder this year. Looking very sharp at the trials and scheduled to return on Saturday in The Shorts (1100m).

Finished third in last year’s edition and was one of the few gallopers with a hard luck story out of the race. Backed that up with a heavy track win over Haut Brion Her but a disappointing winter campaign has taken some gloss off the fairy-tale South Australian. With a guaranteed slot can be trained specifically for the grand final and has been looking slick in a couple of Sydney trials.

Wide barriers proved costly for this James Cummings-trained colt in both the Blue Diamond and Golden Slipper so is certainly capable in high-pressure contests. Impressive first-up win in the Run To The Rose (1200m) with plenty of improvement to come. Some queries over whether Cummings will stretch him out to the mile or keep him at the sprints. Either way, until we see him in the Golden Rose he must remain a genuine Everest contender.

The Golden Slipper winner has begun slipping down the ladder after another unplaced effort on Saturday. Ridden more aggressively, his trademark acceleration wasn’t there, but it still a tough effort off a wide gate carrying plenty of weight. The Richard and Michael Freedman stable are masters of getting horses to peak on grand final day and this colt still possesses everything required to be competitive in an Everest.

If recent form is good form then this is your Everest horse. Lumped 59kg first-up in the Rosebud and blew his rivals away. Surprisingly beaten as an odds-on favourite in the San Domenico Stakes (1100m) but similarly to Stay Inside, the run itself was still exceptionally good so there is no reason to hit the panic button yet.

Started hard in the market at $6 in last year’s edition on the back of an awesome Premiere Stakes (1200m) victory when motoring right over the top of Classique Legend. Hasn’t been able to reproduce that rating figure at four subsequent starts but has shown glimpses of that ability with placings in the VRC Classic and William Reid. Hamstrung by the apparent need for dry ground but will be a sneaky chance if gets into the big one and gets conditions to suit.

Will throw this international sprinter into the mix as a wildcard. Looks the best English hope with 5 wins from 7 starts including a stunning victory in the Group 1 July Cup (1207m) at Newmarket when overcoming trouble before powering through the pack. Possesses a turn of foot which would make him dangerous in an Everest and if a slot holder really wants to gamble then this appears the right horse to roll the dice with.