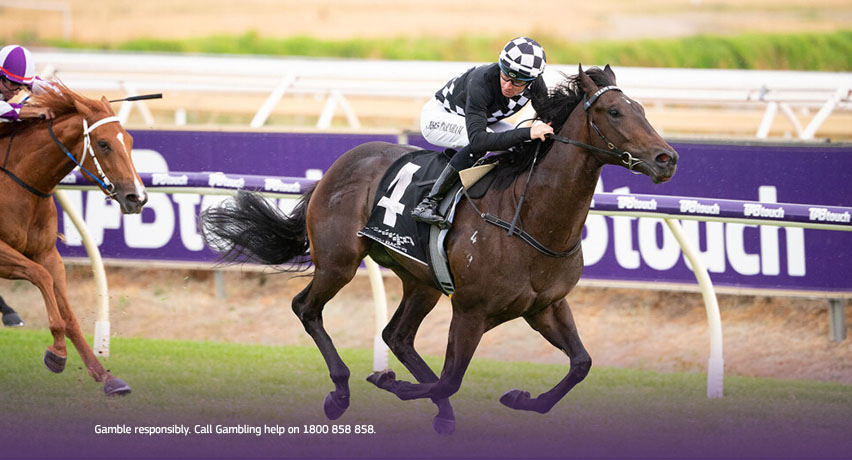 SWEAR TO GOD burst onto the scene on debut with a commanding 1.7L victory over Nunes. He then went around $2.40 from a tricky draw (13 of 14) in a field with plenty of speed drawn underneath him. In the end he had to do too much work and was left a sitting duck and was run down by the subsequent Sires winner in Snowdome and impressive filly All Show. Smaller field, less speed and less depth. He looks really hard to beat dropping 1.5kg. MISS DRAKOVA looms as the logical danger on paper. Can park up in behind Swear To God and follow his every move. SESSWA found a fair bit of traffic at crucial stages on debut at Pinjarra. BALAYAGE BABE wasn’t asked for an effort by Carbery in her recent trial.

STARALIGN was able to fight off the challenge of Comes A Time last start and score a gritty win in a 78+ 1400m. Takes on God Has Chosen again here and has to concede him 2kg, however, Holly Watson looks like getting it awfully cheap in front with Staralign. She rates these front runners perfectly and with an Easterly breeze at his back Staralign looks hard to run down again. GOD HAS CHOSEN was poor at trials and only moderate at his return. Got the run along the fence and thought Staralign more than held him to the line. He’ll sit leader’s back again and gets every chance. EX SPORT MAN put the writing on the wall fresh with a storming finishing down the centre. Great to see the former Karrakatta Plate winner back to his best. DENIM PACK races outside the handicap but Mike Santich’s yard is on fire.

SPECIAL VIEW is probably racing a length or two below his best but this is a great race for him on paper. Excellent placement by Hayden Ballantyne to sneak him back into a 60+ Graduation after running in a 72+ and two 66+ races his last couple of outings. After the Jett Stanley claim he carries only 0.5kg more in this than he did last start when finishing less than 3L off Lonehand Larry, Trade War and Co. Straight to the front, rolls along and gets conditions to suit. Eachway too. BLOW ME OUT beat home progressive mare Pennys Afield last start and maps to get the world perfect run one out and one back. She’s in form and racing well. KAYMAY can be forgiven for last start. Missed away, settled last in a walk and her L600 was as good as any of them. MOJO RHYTHM is coming up sharply in grade but looks a horse on the rise

ARAGAIN was pretty good at her Brian Kersley debut. She settled one out and one back following a genuine tempo behind Special View and then peeled into the three deep line from the 600 to make a move at them. Left in front from the top of the straight and fought on well to finish only 2.3L off Lonehand Larry and Trade War. She’ll be better with an extra 200m and probably finds herself in front by default here. Expecting Holly Watson to start rolling from the 800 and make it a staying test. Worth an eachway spec. TRADE WAR is quickly running out of chances. Given every mortal two starts ago, given every mortal last start. Just keeps finding one better. LONEHAND LARRY won well last start but is drawn in no man’s land here. PICCOLA SIGNORA gets in with a postage stamp weight and is savaging the line.

TIMELY OUTBURST was dominant in her recent 950m trial. Nothing went right for her first-up last campaign and then she struck a white hot 66+ that contained La Farola and God Has Chosen second-up (beat home Mercanto by half a length and meets him 3.5kg better at the weights here). Tipped out and returns here. For a 66+ 1000 this race has very minimal speed and it would be no surprise at all to see Timely Outburst cross them and find the fence. If she does she’ll take serious running down. MERCANTO is the type of horse who can reel off the sectionals required to gun down the leaders off the back of a moderate tempo. 1000m on the short side for him but he’s got a senior rider in a field full of apprentices. MICHELADA is going well but this is 5L tougher than her last few starts. NIGHT VOYAGE looks the perfect Shaun O’Donnell horse. Sit and Sprint.

GALACTIC STORM is only coming from a lowly C1 at Pinjarra Park where he ran down Nintyone Dwyer (since finished fourth in a C1) so we’re not getting excited at all about the form references, but more so about the way that he attacked the line. He has a serious motor and is a 3 year old on the rise. Looks the kind of horse who will get better and better at each and every outing in his life and the kind of horse who the market will gravitate towards. Think he’ll eat up the 1400m and measure up. SUCCESS PLAY was huge first-up. Sat three deep the trip and kept coming in the home straight. Trialled well, ran well and now has a senior rider back aboard. PAT’S GOT SASS could kick through to lead and is well placed by David Harrison. MY DILEMMA won well last start.

HOW’S THE SERENITY faces her toughest test to date and is likely to be artificially short. The money always seems to come for her and she always seems to go round on the short side so punter beware. But it is hard to argue with the way that she’s going and while many will query the high speed, high pressure nature of this race with Ziebell involved if there’s oen thing we know about the Simon Miller yard it’s that they rarely get their speed maps wrong. Logic says they’ll let Ziebell go and use him as a bunny to chase. STATE ATTORNEY will relish the speed being turned on and is going super for Michael Grantham. He’ll be at least double her price and is the value of the two runners. 4 of his 5 career wins are from gate 1. He’s a barrier horse. CHANTORQUE did a great job to get as close as she did last weekend. ZIEBELL isn’t quite the same horse with weight on his back.

SCANDOLO was solid at his return to racing when parking up outside the leader with 60.5kg, hitting the front on straightening and giving a reasonable kick. Has blinkers re-attached, drops 2kg with the booking of Holly Watson and can sit up behind the speed and present at the right time. At double figures he’s relatively attractive as an eachway play. SNIPPILICIOUS hasn’t been seen since winning the first Heat of the Westspeed Platinum Autumn Series. Can box seat on the back of Short Talk and enjoy a soft run throughout. PREMIUM CHOICE never really looked comfortable last start. Tracking into it three deep with cover is probably more his go. LORD LONSDALE was enormous at his return. He’s another who will be winding up down the centre late.

SNIPAROOCHY and HARMIKA were both plunged in betting respectively at their last starts. Both of them went under at odds on and both of them will again be popular with punters in the last at Ascot on Saturday. Going to side up narrowly with HARMIKA who can lob one out and one back following the speed likely to be set by Warm ‘N’ Fuzzy and Dance Cockey. Think she’s a better filly chasing and think she gets that opportunity here. SNIPAROOCHY will settle in a similar spot in running and nothing at all went right for her last start. She is ready to win. DUNBAR had serious traffic issues at his Peter Fernie debut. Worth following. WARM ‘N’ FUZZY beat Cross Statement who was extremely firm last week in a similar race to this. Should cross and find the front.