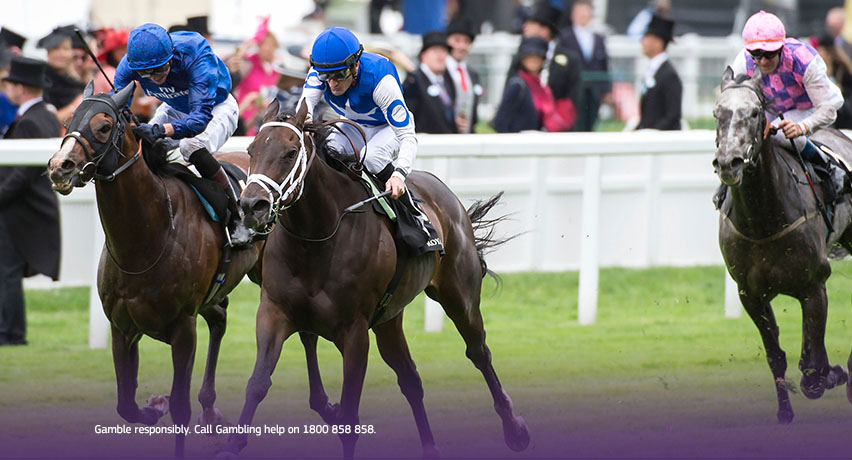 The G3 Albany Stakes over six furlongs (1200m) is one of the premier races for the two-year-old fillies each Royal Ascot. It looks the perfect race for MAWJ, who was ever so impressive over the Newmarket six furlongs last month in a race that was won in 2019 by eventual Albany heroine Daahyeh. The year-younger half-sister of two-time Group 1 winner Modern Games, she should only take another step forward for that win and she should prove very hard to beat. The horse that finished second to her at Newmarket, BELIEVING, met trouble and should have finished closer. She then missed the start by more than 10 lengths at Wolverhampton at her second start but still managed to win. If she can have a clear passage, she’s a contender.

The G1 Commonwealth Cup over six furlongs (1200m) for three-year-olds is the newest Group 1 of the week, having been established in 2015. It has become a pointer to future stallion prospects, never more so than 2017 with trifecta Caravaggio, Harry Angel and Blue Point all eventually shuttling to Australia. At a huge price, it might be worth having something on FLOTUS. The filly is far from straightforward but she’s more than capable on her day as seen when finishing second in the G1 Cheveley Park Stakes (1200m) last year. Her very best figures have her capable and she’s drawn the right spot to be able to react to however the race is run. In an open Commonwealth Cup, she’s worth a play over favourite PERFECT POWER, who should flourish back to the shorter trip, while TWILIGHT JET is certainly exposed but was very good first-up.

The Duke Of Edinburgh Stakes over a mile and four furlongs (2400m) is another of these staying handicaps that has produced future horses for Australia with winners like Kinema, Arab Dawn, Opinion and Fox Hunt all making their way down under. There has been a little move for SIR RUMI over the past couple of days and, back to the 2400m, he creates interest. He clearly had talent last season but wasn’t the most genuine of horses. He was gelded over the winter and has again shown he has talent but is still not all there yet. He finished four lengths behind one-time Melbourne Cup runner Raymond Tusk (seventh on Tuesday) fresh before fourths to subsequent Group 3 placegetter Enemy and the progressive CEMHAAN (who also runs here) over further. Back in trip and meeting Cemhaan five pounds better, he could be one to cause an upset. Harry Redknapp’s MOKTASAAB, the Queen’s JUST FINE and Godolphin’s TRAWLERMAN look best of the rest.

The G1 Coronation Stakes over a mile on the round course for the three-year-old fillies shapes as one of the races of the week, even without G1 Irish 1000 Guineas (1600m) winner Homeless Songs lining up. Stepping out are G1 1000 Guineas (1600m) winner CACHET and runner-up PROSPEROUS VOYAGE, G1 French 1000 Guineas – Poule d’Essai des Pouliches (1600m) conqueror MANGOUSTINE, top two-year-old filly INSPIRAL returning for the first time at three, Group 1 winners DISCOVERIES, TENEBRISM and PIZZA BIANCA, American raider SPENDARELLA and last year’s Royal Ascot winner SANDRINE. Homeless Songs would probably have been the selection had she started, but instead the preference is for Cachet, who remains underrated but is an incredibly tough filly that will be in front for a long way.

The Sandringham Stakes is also for the three-year-old fillies over a mile, but it is a handicap over the straight course with many, many chances. Trainer Charlie Fellowes and jockey Hayley Turner combined to win this race with Thanks Be in 2019 and Onassis in 2020 and they partner again with FRESH HOPE, a last-start winner at Doncaster. Right down in the weights, she looks a fascinating contender. GOLDEN SPICE steps up to a mile and should relish this trip, although might want even further in time. She can figure.

The G2 King Edward VII Stakes over a mile and a half (2400m) tends to throw up a top horse or two for the future and that could be the case with LYSANDER. He won in the style of a very good horse at Newcastle and then just seemed to struggle on the soft ground in the Listed Cocked Hat Stakes (2200m) at Goodwood last time out. The 2400m on firm ground looks ideal and he could emerge as a star of the future here. CHANGINGOFTHEGUARD won the G3 Chester Vase (2500m) – a race that has been won by the likes of Young Rascal and Sir Dragonet in recent years – by six and a half lengths before finishing fifth in the G1 Epsom Derby (2400m) when left a sitting shot a long way from home. He does look to be better with give in the ground but he is the proven commodity in here.

The Palace Of Holyroodhouse Stakes is a five-furlong (1000m) handicap for the three-year-olds and it is a wide open affair with three equal favourites at 10/1 at time of writing. SHAMLAAN has emerged as a nice contender since joining trainer Kevin Philippart de Foy, the young Belgian horseman who appears destined to develop into a champion trainer in years to come. He needs to settle but the bigger field may allow him to do that and if he can get into a nice rhythm, he looks to have another win in him before stepping up in grade again. LIL GUFF, aiming to make it a hat-trick, and JOSIES KID, blinkered first time, are others of note ahead of American visitor RUTHIN.