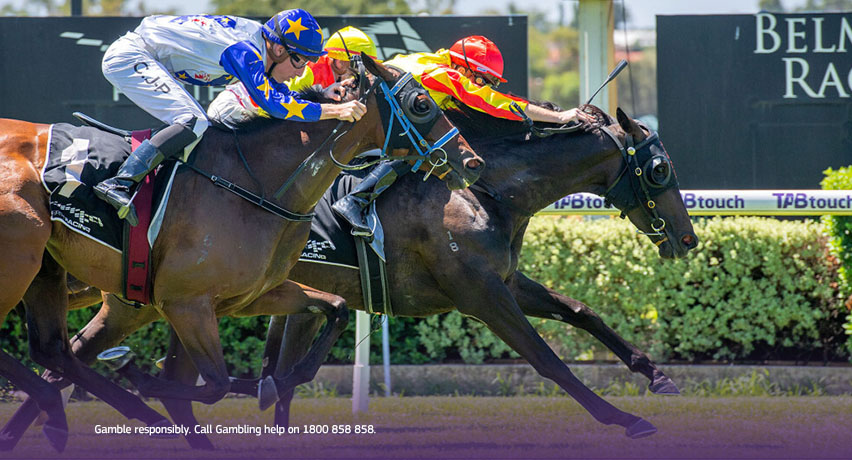 PIERRA ART is a regally bred filly who had absolutely no luck on debut when cluttered away between runners with plenty to offer but no room to move. She was immediately tipped out and returns here off the back of a hot trial win. Thinking that she will find the front relatively comfortably and leads for a long way here. Always wary of 2 year olds first-up at the end of 1200m but she does look pretty smart. SKY DUKE gets a lovely map scenario to stalk the favourite’s every move from leader’s back. She’ll get a tow ball run into the straight and will be dangerous late. YES OF COURSE and GAGE ROADS have both trialled up nicely but have awkward draws to contend with.

LORD GANNICUS will be all the rage and understandably so. His trial was excellent, he was extremely well commissioned on debut in a Saturday SWP 2 year old event behind the undefeated filly Tiffany Street and he now drops back into a 2 year old maiden. Extra 100m – tick, Belmont Park – tick. He’s going to go round odds on regardless of how you look at it. Punting 2 year olds at odds on is poison but many a punter will be ignoring the warning signs and diving in. REAR ADMIRAL has trialled up well on a few occasions and every one of the family have been able to gallop. Looks to settle in a prominent position and gives a kick on debut. ROCKON MOLLY hit the line well in the same race at Lord Gannicus and looks to have come back well. NO ACTION has a bit to learn but has some ability.

AWESOME RIVAL was really popular in betting first-up in a 1300m maiden. She was drawn barrier 8 of 11 and worked her way forward to the breeze. Worth keeping in mind that she settled in the breeze on the Pinjarra Scarpside and was only found wanting late in the race. Thinking back to 1200m, with a bit of cover from an ideal gate she can improve a length or two and that would be more than enough to get her across the line here. Considering the support that came her way first-up I’d be shopping early. THE RUSH was really strong late fist-up behind Hammarmill and subsequent winner Honey Dew. Both runs have been excellent and she shouldn’t be a maiden too much longer. DADIRRA has shown glimpses from time to time and can kick through into a prominent position fresh. SAINTLY CITY is better than what he produced last start.

CHARMING BELLE will be popular in this maiden. She hasn’t been seen at the races for a long while but her recent trial was electric and in typical Simon Miller fashion it was without blinkers. She has shades for her return to racing and the way the S.A Miller yard is going you’d be brave to tip against her. She might be cluttered away in traffic at stages but banking on her turn of foot to get her out of trouble late. FORTY NINER has been a model of consistency throughout his career but just lacks a killer blow. UHTRED RAGNARSON was fancied on debut but looked lost up the 1000m straight. Forgiving. PLEASE GOD will come across and take care of the speed.

SEDUCE ME was stiff not to win the 3 year old Westspeed Platinum feature event when flashing at Pat’s Got Sass late through serious traffic. While all eyes are likely to be firmly parked on the stablemate Desert Vixen it’s hard to ignore the effortless trial when attacking the line without blinkers and the way the stable is #humming. Parks up in behind a decent tempo and with even luck can make a race of it late. MY MARLAINA was held back to them last start and ultimately probably brought Alsephina into the race. Expecting her to roll along here as she did in Geraldton. FATALE FEMME finished only 2.5L off the best 3 year old’s in WA first-up last campaign. Don’t discount her. HAMMARMILL was nothing short of sensational on debut. Held up until the 150m and still won by over 2L.

ARNRAY looks to have found his race (however we did say that on 12 December when beaten a nose). Drops from a 60+ into a C3 into a maiden and has been racing well his entire career. Kirryn Scallan still looking for her first winner as a trainer and it looks like being this horse (and hopefully for her it is Wednesday). This is a very thin 2000m and he stays. Should go very well but there’s always huge trust issues in staying maidens. ANTONINA should get a soft run behind the speed and looks like she’ll keep whacking away. BUCKLAND has a set of shades on. His run two starts ago when off the course behind Floppy was strong. JUST JERRY improved sharply out in trip last Wednesday and will likely roll forward into a position.

SECRET PEARL was specked in the market at odds last start from $61 into $18 and travelled up strongly before the home corner. Didn’t quite finish off but that was a 60+ Graduation behind General Grant, Aragain and Without Reason (all likely to be nominated for the 66+ on Saturday) and Secret Pearl drops back into a 54+ handicap. This is the lowest rated race she has seen in her last 25 outings and she is drawn to get the run of the race. Eachway the field type of assignment and she looks a live hope. THE HAWKEYE is an emerging staying type and takes on a number of rivals either on their mark or out of form. Going well. MELARAB looks to have found a race where he can cross and find the fence. That’s worth lengths to him. THERE’S A THOUGHT can mix her form but on her day, she has a handy turn of foot.

TIFF’S LAD was a tough watch last Wednesday. Landed in a nice position early but as the anchor was thrown in front the race started to change complexion and it got uglier and uglier for CJP and Tiff’s Lad (and Holly Watson and Be Optimistic) as they were shuffled further and further back in a sit and sprint event. By the time Tiff’s Lad got out it was too late and thought he did a great job to pull as much late ground off them as he did. Should nearly sneak eachway. THE ADMIRAL will likely go round a popular favourite off the back of a demolition job in a maiden. This is tougher but he looks to be improving. MONEY FOR OLD ROPE is building fitness and takes luck out of the equation. Almost ready. TRUE MOON enjoys a soft run from an inside gate.

MY BOY EDDY found his right race last start and his loyal following were duly rewarded. He has always shown above average ability but it has all probably come too soon for him and in too strong company. Last start was a 62+ back to a maiden and was far too good for them. This is a nice stepping stone towards another crack at Saturday racing and he looks to find a nice position three deep with cover in the moving line. Progressive 3 year old. GLACIER MISS is a model of consistency and since they’ve ridden her for speed she hasn’t run a bad race. NOTHERN RULER will need some luck but is racing well. GREEN AND SHADY was much better last start.