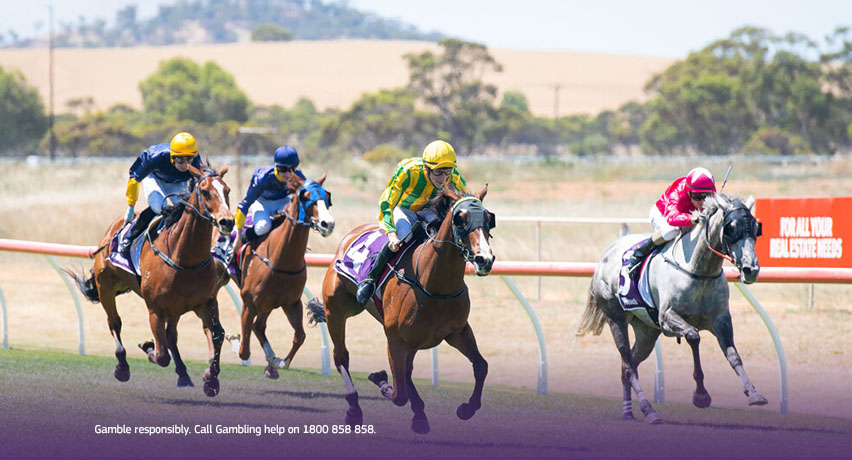 ALLEGIANCE goes on top in a 4 horse staying maiden. They simply don’t get any weaker than this and from the inside gate Troy Turner can sit on the back of Blue Card for the first 1600m and then work out how he gets into clear air. Has been going well from tough gates in big fields. This is winnable (you’d hope). SPECIAL IMAGE was really well commissioned late in betting last start behind Mystical Babe with a 3kg claimer aboard. Forget the weight swings the senior offset is worth it. BLUE CARD beat both of them home last start in the same race and see no reason why he can’t lead from start to finish. MAKUTU the roughie of the four.

HONEY DEW won a recent 1000m trial which has already produced two impressive winners in Ruby’s Moon and Zephyra. In that trial Honey Dew beat home fellow rivals The Rush and Hammarmill and from the inside gate can bounce on the lead or take a sit on the very speedy Saintly City. Gets a great chance to open her account in WA. SAINTLY CITY will come out running. He looked to peak late the end of 1200m last start so coming back in distance a plus. IDLE TALK wasn’t asked for much of an effort at trials. Keep safe on debut. WINNING PIA charged through the line last week behind Born To Talk. If she steps cleanly, she settles far closer.

ZADAR ROCK looks another big chance for the Jim Taylor stable at Northam on Sunday. This race has Beaucount in it which brings real X-Factor. He’s no guarantee to lead from barrier 1 Beaucount because he doesn’t step that well, however, his position in the map and the race makes a big difference to many others. Siding with ZADAR ROCK who can hopefully come across, assess where and what Beaucount wants to do and then be ridden accordingly. Think he’s the one with the most upside here. CELEBRITY WITNESS is a proven weight carrier and this is really good placement by Ben & Dan Pearce. BOLD SUCCESS actually worked home nicely first-up. BEAUCOUNT who really knows?

HOLA MAREA has been trialling well for his return to racing. The first trial was soft behind Honey Dew (already previewed is the depth of that trial) and then won a recent trial at Lark Hill over 950m beating Beloved Star. Think he positions up from the gate and think he’ll be winning a race or two this campaign. CISCOJOE promised to win one all last preparation. Few things didn’t go right for him and he was clearly still a work in progress. Following up on him this campaign. JULYN comes from a race miles and miles stronger than this. Should definitely measure up. RAW FORTUNE hasn’t shown much on race day but has trialled up ok a few times.

FAMOUS JURNEY has won both of his career races at the Northam circuit. Hasn’t been seen for a month and comes into this fresh. While there’s a lot of pace in this, expecting Keshaw Dhurun to be aggressive to hold the top and ride him like the best horse in the race. This is the first time in the campaign he finds the fence and that could be the difference. BRIGHT GLOW is first-up no trial and Peter Fernie produces them fresh a lot of the time with great success. He gets back and can sprint hard late. SHOCK RESULT gets 2.5kg on Famous Jurney for beating him home last start. TOPPA THE MOUNTAIN is almost out of chances.

MARZIPAN LAD finished second to Otheroneson two starts ago in a 3 year old Plate and then last start was drawn really awkwardly in barrier 9 of 9 and yet the punters still backed him hard at an eachway quote. Went right back to last and then never really got into it. Backs up, drops from a 62+ to a 50+ and after the claim looks both well weighted and well placed. VICTORY VIXEN dominated them in a 1400m maiden and then dropped back to 1200m. Wasn’t a bad effort all things considered. WITHOUT REG has put together two solid runs so far back from a spell. GORGEOUS GOSSIP is proving a tough filly to follow.

ELITE STREET is plain and simple an Elite talent. A former Group 1 Winterbottom Stakes winner at WFA and coming off both a third and a bleed in the 2021 Winterbottom. He is a SWP horse, he is a WFA horse, he is a proven weight carrier and he is a proven winner. Throw into the mix his incredible dominance of the sprinting ranks over the Summer Carnival (until the Winterbottom) and he looks awfully hard to beat in the Northam Mazda Stakes. If it was a dynamite leader’s track in the first 6 events that would make things interesting. INDIAN PACIFIC will come out running and it will be interesting to see whether he tries to hold Mervyn early or not. CUP NIGHT will smoke the pipe three back the fence and then can launch through traffic like he did in this race last year. MASSIMO doesn’t know how to run a bad race.

SPEED DREAM gets one last chance from me. The reason being: his only win came at Northam. The shades came off last start and he sat midfield and then really charged to the line in a race dominated from the front by sharp filly Sniparoochy. Should get a midfield run with cover and this is as good a chance as he’ll get in this grade. SAFETY FUSE brings 3 year old mid week form and was far better second-up after finding the 1000m too sharp fresh. TREVELLO is bursting to win a race and the senior rider on will help. DUNBAR finished only half a length off Speed Dream last start after pulling really hard early.