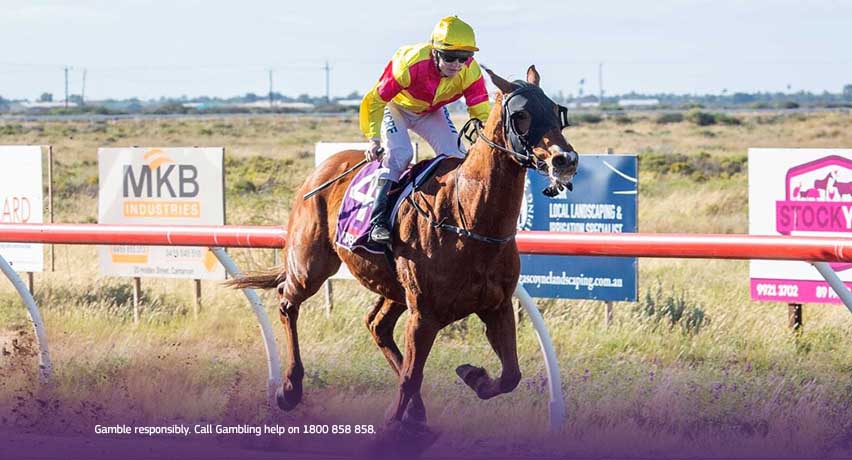 SUPER BON ran second behind Empire Khan at the most recent meeting at Carnarvon and that meant that he beat home fellow rivals Miami Moon, Bon Jungles, Ricky’s Ora and Old Town Predator. They all meet at the same weights and all step out 200m to the mile. Logic says he’ll be hard to beat but these end of season maidens are awfully thin. BON JUNGLES was the target of big money at his dirt debut. Loomed before fading badly once the kickback hit her face. RICKY’S ORA ran a massive race two starts ago at 100-1. Reproduces that and he can break through. MIAMI MOON is a long time maiden and is at her 10th run of the prep.

KRAMDEN is well placed back into this grade by Dennis Couper who is having a wonderful Carnarvon season. Winner in this grade three starts back with 63.5kg when running them ragged over the 1000. Since then has contested a 64+ and 68+ when far from disgraced behind the likes of Behrooz, Woodbug and Shackleton. Excellent use of the claim and a great opportunity for Maddy Cornick to kick another home on a jump, run type. CATIA has been a find for Jon Jachmann this season. Little mare who can tuck away behind the speed and is loving the dirt racing. WOODBUG destroyed them last start. Staying out of trouble from the gate might be a blessing. MOORUMBINE didn’t bring his Broome form to the Gascoyne last start.

THE WISE ONE is a hit and miss commodoity who either leads and is hard to run down, or doesn’t lead and doesn’t fire a solitary shot. From barrier 1/2 at Carnarvon you want to be leading and considering he only needs to cross Throttle in the early stages he should find the fence. 1200m is probably on his limit but with the Jett Stanley claim he drops 1kg on recent efforts and should take running down. WORZEL can work to the breeze and run a cheeky race. SEA LAKE looks to have found her most suitable race for the preparation. Drawn wide but gets back regardless. FAIRER AMERICA ran well earlier in the season.

Suggested Bet – THE WISE ONE WIN

SHACKLETON was a tough watch last start. Unlikely to have been in a position to run down Behrooz who was simply dominant from start to finish, but the effort of Shackleton in defeat was still enormous. Was charging late once he finally got out and is only better suited at 1200m. Darryn Pateman has him flying and this looks a nice race for him to notch another feature sprint. MISS ELLMYA can find the front here and make full use of the inside alley. As she showed in Broome she’s a hard mare to catch once she starts rolling. SPEEDING COMET will need to come out running to get across. If he does, he’s another live hope. COUNTER DRIVE is back sharply in distance and should be doing his best late.

IN THE BAG makes his own luck in races and should be able to roll to the top here and control proceedings. Likes to get running mid race and if Jess Gray can pinch an early breather he’ll be rolling from the 1000 and should prove hard to run down. Like all of Darryn Pateman’s horses is deep into the campaign and we’ll trust him to be keeping them up for one last start. PROXY gives Emma Stent a live chance at her return to race riding after maternity leave. Form isn’t horrible and this is a nice race for him. PELICAN PICK will need to stay out of traffic and kickback from the barrier. If he does, he has a nice turn of foot. VOLPE demolished them two starts ago. Didn’t fire last start. Keep safe.

STAADEN has hit a purple patch in the Cups Campaign and is looking to add a Carnarvon Cup to the CV. Won the Port Hedland Cup in a slog when they went 5.5L faster than average and it turned into a procession when McGruddy kicked him clear to win soft by 2L eased down late. Took that form to the Broome Cup and was again simply dominant from the breeze when romping to a 1.8L win. The only query here is barrier 1. Carnarvon is the kind of track where you’d rather be drawn 16 than 1 and the 2000m starting point is not overly forgiving if you’re a half stride slow. Fingers crossed he jumps quick. MARXIAN is a big local hope and if Staaden is slow away and Marxian can be put into the action it’ll be game on a fair way out. MADRID CENTRO was brilliant last start. Query at the trip but once Ray Malpass gets them going they don’t stop. SCENIC LORD doesn’t have a rider. The old boy won’t know himself with 55.

CAPE SOUNION won at Port Hedland three starts back and then hasn’t really fired his last two at Broome and Carnarvon. Rob Gulberti puts the blinkers back on and comes back in distance. This is as wide open a race as you’ll see and the grey isn’t impossible and should go round double figures. PREVAILING WINDS was backed as if he was unbeatable last start. Ran a huge race but now has the poisonous barrier 1 as a midfield type. FERNGROVE can never be discounted in this grade. His best is better than what his opponents have but he also doesn’t always bring his best. SUNDAY AT SIX has been a model of consistency since joining the new yard and should take up a lovely position in running.