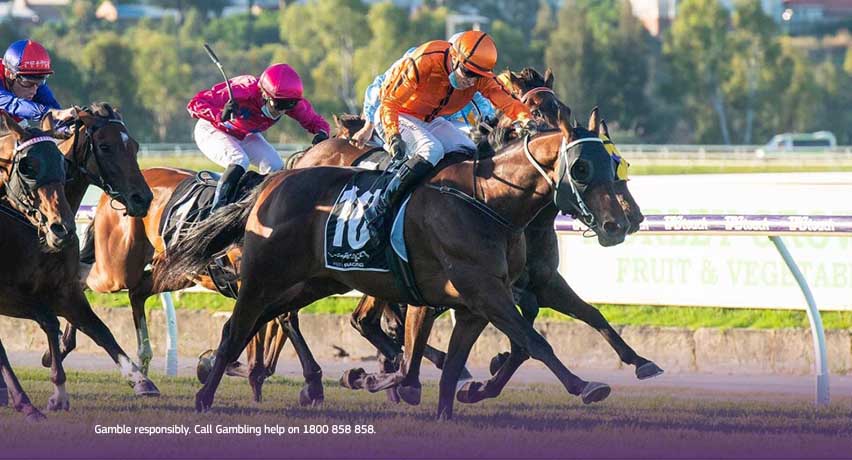 MAGNIFICENT ANDY trialled well without winkers and with Brad Parnham suspended returning apprentice Brandon Louis is thrown a wonderful opportunity at a metro winner by SJ Miller. Should park up outside the speed and go close in this small select field. REBELZONE won her (second) maiden with a strong effort and from the draw she should position up ideally one out and one back in the run ready to pounce. DOUBLE DEMERITS was plunged at Pinjarra last start and had absolutely no luck at all. GOT YA will come out running and should get conditions to suit (12m rail and Easterly breeze).

ST JOHN was set a task last start. Drew in barrier 11 of 11 and ended up enduring a torrid run in transit when sitting three deep the trip outside the leaders and then pushed out even deeper on straightening. Thought he did a super job to keep battling on and finish within 1.5L of Rebelzone and Superiorize. From the barrier he is likely to lob behind the leaders and get a gun run. GOLD FRIARS and SAINTLY CITY will both come out running from their wide gates in an attempt to cross to the fence and breeze respectively. If they get across they’re live chances, if they don’t they’re in trouble. ZEPYRA will have a big following from the trials. Clearly talented but has missed away badly in both trials.

KING CRUZER has always promised to put a few together and go through the grades but has been a really slow burn for Justine Erkelens. The blinkers were on in a recent trial and he parked three deep for the majority and ambled up to them in the straight. Don’t think 1000m is his go but this is winnable and the penny might have finally dropped with him. CHOICE BID was huge last start. Is now a 20 start C1 galloper but to sit three deep the trip and go down by less than 2L to subsequent Saturday winner Sneaky Chance is a super effort. SCHOOLHOUSE ROCK is produced without a trial. His best is good enough to sit back and zap these. THE REPUBLICAN has shown that his best is as a sit sprinter and he gets those conditions from the barrier.

MARKET STRYKE is making his way through the grades this campaign. Was luckless first-up behind Keytrade and has since won a maiden by 2.8L and a C1 by 2.5L (when backed as if unbeatable). He showed a touch of versatility last start by taking a sit on the leaders and here he looks like rolling forward to lead or breeze. Takes serious beating. MARZIPAN LAD produced a big career PB when pushing Otheroneson to the line and beating home River Rubicon in a 3 year old Plate on a Saturday. Did get it awfully cheap (first 800m = 15L slower than average) but still hard to ignore. SKETTA is a talented mare on her day and a better chaser so forgive the moderate trial. KOHLI hasn’t produced yet in WA, however, is a winner off 28 days.

GUARD THE SAFE gets one final chance as the on top selection here. He went around $3.70 in a C1 four starts ago and was beaten in the final few strides by a progressive mare in Dazzling Dane. Since then he has finished 5L off Cristal Dane in a 60+ Graduation, 3L off subsequent 3yo 0MWLY winner Michelada and only 2.7L off My Dilemma, Harmika, Success Play, War Gem, Featherweight & Co in a 3 year old Plate when never getting clear at any stage. Now or never for him. MONG KHON finds a race where he can spear across and nearly cross them. First-up last campaign he finished three quarters off Trade War and beat home Atlantis Beach. WINNING ACES was huge last start. Thriving in his new racing pattern but will need conditions to suit. WITHOUT REG was a sound return.

WAR GEM resumed in a 3 year old Plate when finishing third only 1L off the winner. Drops back to a 0MWLY and is drawn to box seat on the back of He’s Gold, Victory Vixen and Above The Peg, who all like to go quick. Looks a suitable set up for him to track the tempo and pounce late. HE’S GOLD was disappointing last start but comes right back in grade and has blinkers and a front running apprentice added. No surprise to see him give real cheek here. LADY TORNADO was finished off the race really well fresh and should relish the extra furlong. VICTORY VIXEN dominated last start. This is tougher and she comes back in trip.

CABLE GUY hasn’t won a race at Ascot after 12 attempts but you could also make the case that he’s never been going this well in his career either. His last two efforts have been excellent at Ascot, second to Recapitulate (beating home Celebrity Witness by 4.5L and meeting her 2kg better at the weights here) and then when tramping three and four deep throughout when third behind Lonehand Larry and Trade War. This is a significant drop in grade and he is drawn to get the run of the race. Great race for him. CELEBRITY WITNESS steps to 1800m after a strong weight carrying effort at Geraldton. Should be there right place, right time. CORPORATE LARRIKIN gets across and gives cheek. BARAMAGIC just needs to reproduce his first-up effort.

ROLLED GOLD beat home subsequent winners Victory Vixen and Wommel Wock at his last start. He can roll forward and sit right over the top of the speed and with the early scratching of the other speed horse in Feels Hot it looks like he can lead and control. From there he holds a tactical advantage over his main rival in running. MOJO RHYTHM put the writing on the wall last Wednesday over 1400m at Pinjarra Scarpside. Screaming out for further and is capable of settling at least a pair or two closer in the run here from the better barrier. He’s come back bigger and better this preparation and looks a big danger. BIRDIEAGLE backs up off 5 days from Ascot on Good Friday and will keep coming late. RUN LIKE FIRE was able to sprint well fresh last campaign.