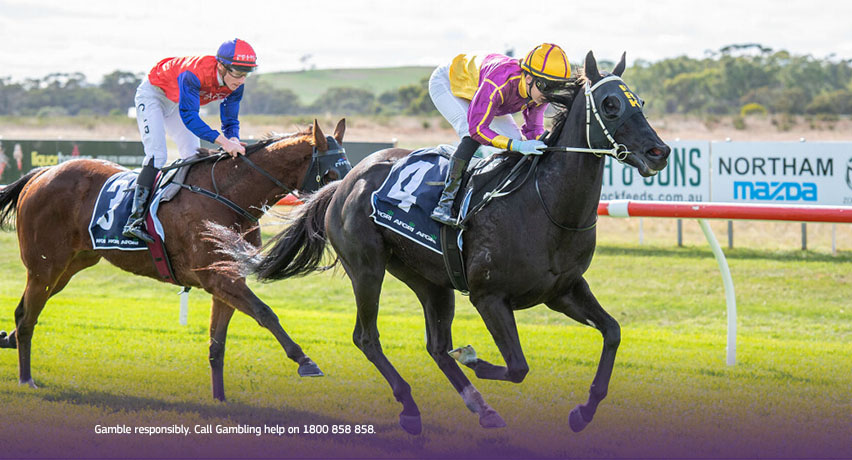 NERO KING makes his debut at 1400m and from the way he has trialled it looks like up his alley. When he ran third to Oly’s Choice (debut winner and plunged in a C1 since) he conceded them a huge head start and rattled to the line. Most recent trial never saw daylight. Speculating on debut that he’ll be able to run these down. Not a strong maiden. RIBBING steps out to 1400m for the first time which is a natural query but it’s hard not to be drawn to the fact that Steve Wolfe has called on Paul Harvey to ride. Think he can kick through, lead, control and dictate Pontiff style. DELTA ANNE looked to have found her race last start. She was still solid in defeat but it’s concerning that Evidence broke clear to win by over 3L. We’ll see on Wednesday how Evidence stacks up in a C1 at Belmont. FRIES WITH THAT was in the same race and couldn’t sprint her.

LOOK UP was very green and raw on debut and had a senior rider embargo placed on him due to his racing manners. He looks like he might still need further than 1400m but this looks really weak and winnable for him at start number two. Kept out of trouble expecting him to get over them late. Given the strength of the race he’ll be very popular in betting. MASTER SAFARI has been alright in two runs to date and should position up from the draw. MARCHAMLEY should be suited getting out in trip. SYRIANOS ran home well at Kalgoorlie.

WHAT A PRINCE gets another go on top. First-up in WA he ran second to Valley Of Queens (subsequent C1 winner), second-up he finished second to Ciscojoe (subsequent C1 winner) and third-up he went to a mile, got trucking in the middle stages (first 1000m was run 6L faster than maiden average) and was found wanting late. Late scratching at $1.50 last start and back to 1400m looks the key. Gets his chance. PLAYIN’ HARDBALL is 7 weeks between runs and is a 2 year old filly taking on the older horses but the Amelia’s Jewel, Snowdome, Top Of The Pops form is good for an all age maiden. MELWOOD COAST gets back and runs on in all his races. KING’S WENCH has ability but gets a long way back.

THE PANZER went around at 50-1 first-up but finished off into third behind Awesome Rival (in a C1 at Belmont on Wednesday and likely runs favourite) and She’s Puzzling who went around $1.90 last Thursday in a maiden and toyed with them. Look the right form reference and Fred Kersley’s yard is going super. TIGER MOVE lost touch with them at stages last start on a rain affected track but got going late. Always promised to win one. SECRET LAIR has been a model of consistency finishing around the mark all preparation. LUKE’S PIERRO is about ready to win and Paul Harvey goes on.

SENORITA DOROTEA went around $1.50 first-up and was unable to reel in Capital Flight (who was given a peach by 3kg claimer Luke Campbell). Capital Flight has always shown above average ability just had no luck and so happy enough to follow that as a form reference and tip into the filly again. This looks weaker again so she’ll be a similar quote. DRAGONFLIES has ability but has some serious issues. He’s a rising 8 year old who can be quirky (generous). PICK AND PAY is drawn sticky and might need further but finds a maiden this prep. ARTIE DODGER won his trial well.

KEEP ATTACKING has looked good in each and every trial over a few preparations. Was nominated, accepted and scratched from a race at Pinjarra last Thursday when drawn the wrong side of the straight and saves for this. From the good gate he should take beating on debut. Todd Harvey has produced 11 first starters in the last 750 days for 4 winners at 36% Strike Rate and 44% POT. Gets them ready. STAR SOPRANO might lack a killer blow but has done nothing wrong in two starts for Grant Williams. BRAVE VENTURE has looked handy in each of three trials and should be there abouts on debut. BONNIE LAD is a 2 year old taking on the older horses and gets a soft run.

FIND YOUR MAN was huge first-up behind Dance Session. Was drawn barrier 10 of 11 and got right back. Had to sustain a massive sprinting effort from a long way out when the majority of runners were being run off their legs. Was a be on me next start kind of effort. CAPITAL FLIGHT rises 3kg in weight coming from a maiden into a C1 (it’s a tough system) but he looks like a progressive kind of 3 year old who should make his presence felt. Love the way Luke Campbell is riding and with speedy types Ruby’s Moon and So Birikkino likely to lock horns he can sneak up in behind them and enjoy a lovely run. KIMBERLEY BOY went around $1.30 first-up last preparation and dominated them down the straight. Hard to not like the trial. HONEY DEW is double nominated for Wednesday and Thursday.

DAISHIO resumed down the 100m straight at Pinjarra last Thursday and was draw in barrier 1 which as most punters will know is poison down the straight in a field size of more than about 6 runners. Thought she did a super job to finish second behind Saturday type 3 year old Bopping Blue and 7 days later round a bend she gets her chance to bounce back. FIRST LAW is drawn in the Swan River on Wednesday and in barrier 2 on Thursday. Logic says they’ll likely end up here. This is winnable for him. VANE TEMPEST is well suited to C5 racing and the claim brings her down to a winnable weight. DOUBLE JEOPARDY can punch up in behind.

KAZOKU won first-up, finished third behind Testing Love and subsequent winner Scorpion Stormz second-up, finished third behind Snippy Miss and subsequent winner Rulelee two starts ago and then last start looked to be run off her legs in a fast run mile. Back to 1400 and drawn a gate to get a lovely run. Think she can bounce back. VALLEY OF QUEENS will jump and roll along out in front. She’ll be hard to run down again. STRAKIN didn’t seem to see out a strong mile last start. Back in trip a tick. TRULY RELIABLE is classy and has massive X-Factor but may need the run.