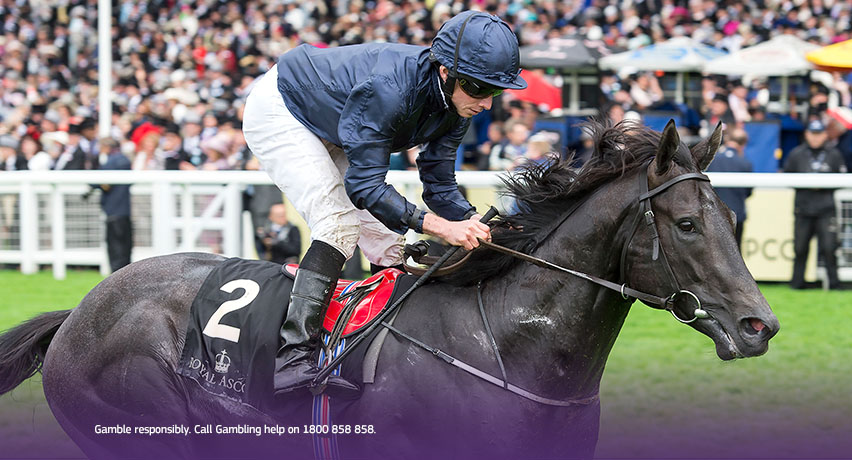 The G2 Norfolk Stakes over five furlongs (1000m) for the two-year-olds sees the fastest and most precocious juveniles going head-to-head. Past winners have included future stallions like Sioux Nation, No Nay Never, Approve, Dutch Art and Johannesburg. WALBANK shapes up as the testing material after scoring by seven lengths at York at his second start. The form out of his first run over this course and distance, where he finished second, has shaped up well with fourth-placed Royal Scotsman finishing third in the G2 Coventry Stakes (1200m) on Tuesday. The son of Kodiac gets the tick over a daughter of the same sire, PILLOW TALK, a Listed winner at York last time out, while the unbeaten THE ANTARCTIC is not without claims.

The King George V Stakes, a handicap for three-year-olds over a mile and a half (2400m), has been a race that has traditionally unveiled future stayers for Australia. Last year’s winner Surefire, runner-up Sir Lamorak and fifth Military Mission are now trained in Australia while past winners have included Melbourne Cup runners-up Give The Slip and Beekeeper as well as Dandino, who filled the same spot in the Caulfield Cup. Really quite keen to see what POST IMPRESSIONIST does here, noting that this preview will be published before his last-start conqueror Eldar Eldarov contests the G2 Queen’s Vase (2800m) on Wednesday. Hailing from the family of Grade 1-winning hurdler Grumeti, the son of Teofilo should relish every bit of the 2400m and he gets in well at the weights. SECRET STATE is regally bred as a Dubawi half-brother to G1 Breeders’ Cup Juvenile Turf (1600m) winner Line Of Duty, out of G1 1000 Guineas (1600m) first past the post Jacqueline Quest. The question mark is the trip but if he stays he will be hard to hold out.

A small field of six contests the G2 Ribblesdale Stakes (2400m) for the three-year-old fillies, a race that was won by subsequent G1 Mackinnon Stakes (2000m) winner Magic Wand in 2018. MAGICAL LAGOON, who steps out in the Yulong colours, creates plenty of interest here. A sibling or half-sibling to five stakes performers, most notably four-time Group 1 winner Novellist, she steps beyond a mile and two furlongs (2000m) for the first time. She looks every bit a mile and a half filly and she also has tactical speed which could prove important in a race that is likely to be run strategically. She gets the nod ahead of SEA SILK ROAD, who races in the same Tsui colours as her sire Sea The Stars and who also shapes as though she will appreciate the distance.

The G1 Gold Cup (4000m) is one of the highlights of Royal Ascot each year with placegetters like Spanish Mission, Cross Counter and Master Of Reality also showing form down under. STRADIVARIUS is looking to join Yeats as a four-time winner of this time-honoured contest, having finished fourth last year following wins in 2018, 2019 and 2020. An eight-year-old now, there is little doubt he’s not the same horse he once was but his win first-up in the G2 Yorkshire Cup (2800m) was a good pipe-opener for this and I would expect him to take a power of beating. That said, it looks worth taking him on with KYPRIOS who has been a revelation at 2800m this preparation. A horse that relishes fast ground, he defeated his Group 1-winning sister Search For A Song in the Listed Vintage Crop Stakes (2800m) at Navan before galloping clear for a 14-length success against inferior opposition in the G3 Saval Beg Stakes (2800m) at Leopardstown. He has some unfinished business at Royal Ascot, having been withdrawn from the Queen’s Vase last year after burrowing under the stalls, and he looks the horse to beat with the primary concern being the marathon journey.

During my time in Hong Kong, the Britannia Stakes – a handicap contested over a mile for three-year-olds – was always the most eagerly watched race as you could almost guarantee that a handful of runners would end up at Sha Tin. That remains the case now, although horses do end up in other parts of the world – 2019 victor Biometric will run at Flemington on Saturday, while the horse that finished fifth behind him at Ascot was Numerian, winner of the G2 Q22 (2200m) at Eagle Farm last weekend. It is a race that could go to any one of 20 horses but it might be worth taking a stab with HARROW. He finished a long way behind G1 St James’s Palace Stakes (1600m) placegetter My Prospero and G3 Hampton Court Stakes (2000m) odds-on favourite Reach For The Moon in the Listed Heron Stakes (1600m) last start but, back to a handicap behind a likely genuine tempo with pacifiers on for the first time, he can run a race at huge odds. Others that loom as leading contenders are the unbeaten KING OF TIME and the lightly weighted KITSUNE POWER, with the Queen’s SAGA next best.

The G3 Hampton Court Stakes (2000m) is another race that has produced horses both for Hong Kong and Australia, with winners including G2 Moonee Valley Cup (2500m) winner Hunting Horn, G1 Caulfield Stakes (2000m) hero Benbatl and Mackinnon Stakes victor Glass Harmonium. The placegetters have done well, too, including the likes of Group 1 winners Zaaki and Mirage Dancer. It is a special moment when the Queen has a Royal Ascot winner and it looks likely that she will win her first Hampton Court Stakes with REACH FOR THE MOON, having finished second with First Receiver, Peacock and Quadrille. Reach For The Moon was set to start as one of the Epsom Derby favourites but missed the race after a setback. While he will relish getting to a mile and a half in time, he should love getting to 2000m here and his figures have him clearly ahead of his rivals. The biggest danger is CLAYMORE up in trip, but he needs to put a poor run in the French 2000 Guineas – the G1 Poule d’Essai des Poulains (1600m) – behind him.

The Buckingham Palace Stakes, a handicap over seven furlongs (1400m), was a fixture of Royal Ascot from when it was extended to five days in 2002 until it was replaced in 2015. However, it returned in 2020 and is often one of the most intriguing betting races of the week. I’ve long been fascinated by MUMS TIPPLE and I have to have something on him each-way, even if he is not anywhere near the horse he looked as a two-year-old when offers of £3 million (AUD$5.2 million) were turned down. Having won his second start, a rich sales-restricted race, by 11 lengths, he started equal favourite in the G1 Middle Park Stakes (1200m) where he finished seventh to the impressive Earthlight. A Listed winner at four, his form has tapered off again since but he’s the type of horse who can always bob up under the right conditions. Hopefully apprentice Alex Voikhansky, who takes seven pounds off and who has been riding for less than a year, can get Mums Tipple somewhere near the lead and he can cause a monumental upset to continue his remarkable story.