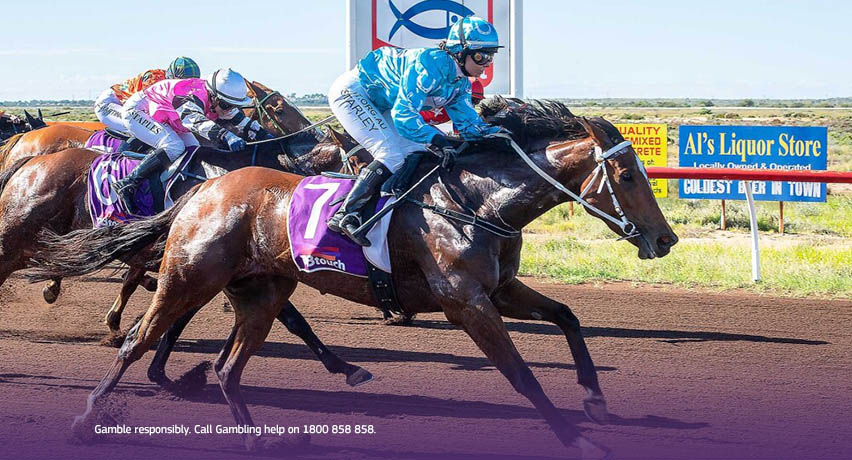 BONDONNA got into all sorts of trouble rounding the bend at her first start in Carnarvon. Travelled up nicely, handled the kick back and still found when she finally got clear. Thinking that drawn wider is a blessing in disguise and the step to 1200m also looks suitable. Winnable for her. MAHUTAS did everything wrong at his Graeme Hammarquist debut. Series of gear changes, 0.5kg less in weight and the obvious danger. AMELIAS CHANT wasn’t too bad at her dirt debut. BEST TESTIMONY a newcomer who might need the experience.

KLONDIKE KENNY is no stranger to weight. He carried 62kg first-up when he slipped at the start and had to sustain a long and searching run and was only found wanting in the concluding stages when finishing fourth behind Test of Strength, Weld and The Divine Wind. Last start he finished a game second behind Calabia Joe in a 64+ and drops back into a 56+. Weight is a big ask but he’s going super. MORDOR should be about ready. First-up run was encouraging over the short course behind Kramden and then comes through the same race as Klondike Kenny last start and gets 1kg weight swing on him. LICKETY SPLIT makes his Carnarvon debut for Ray Malpass and was competitive in 58+ races at Port Hedland when last in work. DENGA is going well.

VERDIGRAS simply never got into the race first-up when settling rearward and run off her legs. There’s no Can’tcatchthis in this race and that looks the obvious form reference. Worth remembering that she did open favourite in fixed odds betting early. Tash Faithfull returns to the saddle (I’ll be having a Faithfull/McNaught jockey challenge quinella if it’s black figures #dreaming) and she looks a sharp improver. WOODBUG ran really well behind Can’tcatchthis and while he meets Verdigras 6kg worse at the weights he is always a winning chance in this grade. OUR INSIDER should be suited to dirt racing. The trial leading into his Geraldton debut was electric. MOORUMBINE next best.

THE DIVINE WIND looks to have found his race. Building into the campaign, ready to go third-up and now gets out to 1400m. Third to Test of Strength and Weld in the highest rating race so far this season, third to Calabria Joe and Klondike Kenny in the second highest rating race of the season so far, he’ll be very popular in betting. Looking to shop early if there’s half a price about him and think that he’s another leg of the Faithfull/McNaught show at Carnarvon on Thursday. MADRID CENTRO is a chance if he can cross and find the front. Different horse against the fence. OUR BOY CHARLIE drops 8.5kg on a last start win and is racing really well. THERE AT FIVE can improve second-up on the dirt.

FROSTY BEVERAGE might sneak under the radar here. Fourth in Geraldton in a 58+ to The Singing Tiger and subsequent winner Admiral Husson, then two starts in Carnarvon, both in 56+ races. Now drops into a C3 and carries the same weight after the claim for emerging apprentice Luke Campbell. Needs to step, that’s the big concern. If he does think he’s a live chance in an open race. SUNDAY GIN might still be looking for further but his dirt debut was sound. NERO CHIN CHIN has returned as well as ever. Big day on paper for Zach Tyler. TAKE ANOTHER LOOK is a capable type.

MYSTICAL MAN is hopefully one that we’ve timed out run to perfection. Risked him first-up at 1200m (good run into fourth), risked him second-up at 1400m (good run into fourth), ready to get involved third-up stepping to a mile. It is the exact same set up as his first preparation with Zach Tyler where he was a third-up mile maiden winner by 6L. Finally gets a chance to work his way into the race and Tash Faithfull returning to the saddle is key to his winning chances. EGG WHITE brings a level of intrigue at his Carnarvon debut. He is race fi and can sustain a run out deep on the track. ART ADMIRER makes his Tony Scally debut at his 14th run of the preparation. VOLPE got too far back last start.