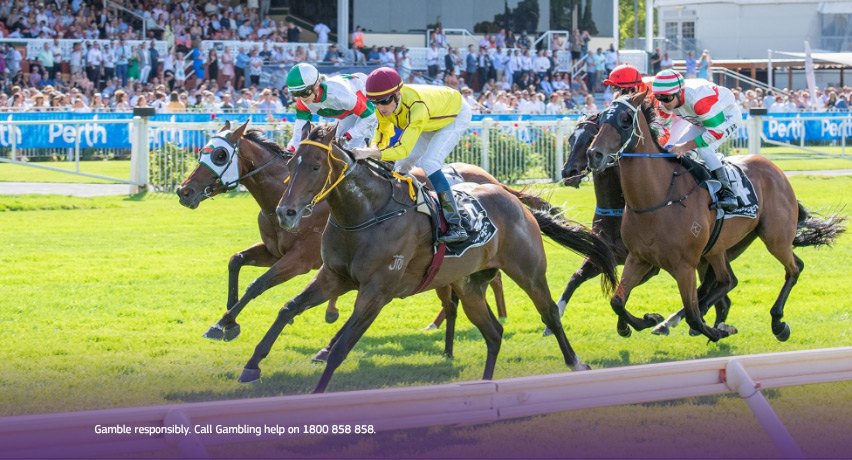 TALLINN hails from the Brett Pope yard who are fighting hard against a virus at the minute but provided he is forward and healthy should give this very weak 1000m scamper a shake. First-up last preparation trialled well over 950 at Lark Hill before running into highly impressive youngster Iseered Iseered at Kalgoorlie. Was then run off his legs by Beau Zoom at Ascot. Either of those performances are good enough to win here. MOLLY MAGEE looked all at sea down the 1000m straight at Pinjarra. Has shown enough at trials. GINGER KNIGHT is getting closer and closer to breaking through. BELAFONTE BOY is looking for further.

AMELIA’S CHANT absolutely flew the gates at a recent trial to find the front with ease. From there she dominated the trial out in front and ran around Belmont in slick time, marginally faster than fellow debutante Talkaboutyou. Drawn a gate inside of him she holds the aces and it would be no surprise to see the typical Miller Money for another regally bred youngster with speed and talent. TOPPA THE MOUNTAIN got well out of his ground on debut and caught the eye in the run to the post. TALKABOUTYOU will come out running in an attempt to find the breeze. Trialled like he would win races. GLACIER MISS ran a ripper on debut.

LAST OF THE LINE was brilliant at his return to racing last weekend when drawing a wide gate, going back and savaging the line. He backs up off 7 days which is an identical preparation to his initial campaign when successful second-up off the quick back-up. HE can hold leader’s back from the gate and in the conditions that is a very nice map position. Looks highly progressive and knows how to win. TOLLMAN doesn’t run bad races and should track up in behind them. Fresh and back in trip look positives. PHONEME has really come of age the last few months and the Lane/Parnham combination is deadly. MAJINIKA rolls to the top and is the big beneficiary of the 30km/h Easterly breeze.

THE FUGAZI has been a bit of a wallet burner for punters this preparation but he is continually dropping in grade. This is exceptionally good placement by Team Gangemi. Placed to Lorentinio in a 72+ only three starts ago and drops out of a high rating 66+ back into a 60+ Graduation. Can sit right over the speed from the draw and again gets his chance. GIANT LEAP was a massive follow out of his enormous first-up 1000m display when plunged in betting. Conditions will be against him but he looks to have returned in super order. PEPPIJACK will be put into the race and that’s been the key to his recent success. BRUCE ALMIGHTY will box seat and holds form well.

MAGICAL DREAM is about the only runner who maps potentially worse than midfield that I will tip into all day. Always risky tipping into horses worse than midfield with the Easterly blowing but this filly is extremely well suited at Set Weight and Penalty conditions. Has the near side blinker added, returns fresh and was a barnstorming winner of the Belgravia Stakes against the pattern over the summer carnival. DEVINE BEAST arguably should have beaten the stablemate last start when finding traffic at crucial stages. Really genuine type. OUR DANNI has hit a purple patch of form and this is an excellent use of Carleen Hefel’s 3kg claim. ALL DAY SESSION an improver from the good draw.

TREASURED CROWN was at an awkward part of the preparation last time out when 8 weeks between runs and drawn in the carpark. Raced well below his best and was never in the race. Now 14 days later has that run under his belt, gets the services of W.Pike and can enjoy a much more favourable run in transit. Huge improver and is already a stylish winner in this grade. DEFIANLY and LONSDALE LADY both come from the Group 3 La Trice for the fillies and mares. They both ran well and are both suited to this sort of ratings race. Both can stay and both should contest the finish. CELTIC DIVA is bursting to win a race. Keep in mind for the next few weeks.

LEICA JAGUAR didn’t look to get much luck squeezing up on the fence last start. No comment in the Steward’s Report does make you wonder whether it was an optical illusion but regardless we’ll follow up with him. Looks well suited in this high speed, high pressure 1000m race with the inside gate to his advantage. The way he is jumping he should be able to travel up in behind the speed generated by three quarters of the field (Weaponson, Nemiroff, Prince Devoutly, Time to Sizzle, Cockyjoy, Glasgow Girl, Bos Taurus, Janaura) and looks hard to hold out. TIME TO SIZZLE loves racing fresh and with no weight is likely to give them something to run down. PRINCE DEVOUTLY hasn’t been seen at the races for over 400 days but trialled like he hasn’t missed a beat. GLASGOW GIRL a capable mare on her day.

CAROCAPO had his first outing in black type company in the Summer Scorcher when dropping back to 1000m which isn’t really his go. Thought he ran out of his skin and proved he is well and truly up to his company. Draws a gate to hold a position in running and this race contains a stack of speed drawn in all parts of the line. 1100m much more suitable and the way he’s going he’ll give a big eachway sighter. INDIAN PACIFIC is a winner and a top class sprinter. He had to absorb pressure and do it at both ends last start. He might have to do it a bit tougher here but is hard to knock. MERVYN is the weight horse but might have to burn early to cross them. ESSENTIAL SPICE was a super run from an impossible position last start.

NAUGHTY BY NATURE ran second to Dance Music last start this track and distance. She is a m99 rated mare and this field is a well exposed 72+ opposition. She has been knocking on the door throughout the fillies and mares series, riddled with bad luck stories and the victim of slowly run races. Should get a more genuine tempo here and is ready to win. PUSH TO PASS will be the forgotten horse in the market place. Capable of giving this a shake at 20-1. RATION ALY is a winner and got herself out of a sticky situation last start. Not convinced these inside gates are to her benefit. JUICING CARROTS is always a show when dropping back in trip.