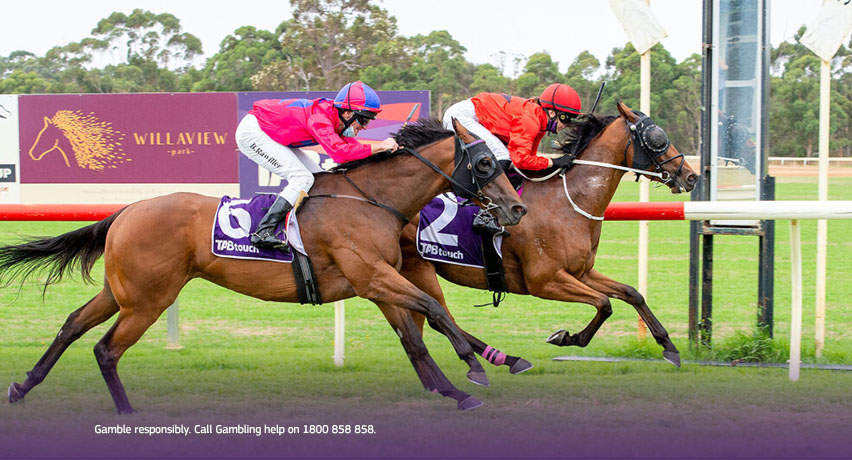 MONETARY GAINS is no star and has a cross over nose band applied for his return to racing but thought his most recent 950m trial at Lark Hill behind President Sam was sound. President Sam ran third at Pinjarra on Sunday and in a weak Albany maiden CJP riding is enough to justify putting him on top. URBAN WARRIOR has been plunged his last four starts. Those backing him face an ethical dilemma: shades back on and dropping 3kg, do they go again? BONAMICO ran a super race on debut but is drawn awkwardly. FLY BETTER was massive at any old odds last start.

SWEET SNITTY has turned a corner in the last two outings after a lacklustre start to his WA career for Jordan Rolfe. His good mate Michael Poy kicked him home to victory on Esperance Cup Day in a strong win and now while he rises to 62kg he gets another great sighter into wining back to back races. LACEVINSKY showed grit two starts ago but then was only plain last start when over-racing really badly. Beat Sweet Snitty that day at Barker too and gets weight on him. SIR SNUGALOT will find another race where he can kick through to lead and control. LONG KNIFE BROTHER is a hard horse to follow but on his day he’s capable.

SECRET LAIR went close at Kalgoorlie two starts ago and the recent trial wasn’t horrendous behind Gingers Secret (on debut for Adam Durrant at Pinjarra Thursday). Good use of Taj Dyson’s claim. Weak and open maiden. One of many hopes. BIN SHALAA promised a lot early but hasn’t quite lived up to expectations. This is the easiest race she has seen in her career. LUCRATIVE LUCY was ridden for speed in her Malcolm Byas debut and didn’t she give some cheek. There isn’t much of her but she’s quick and now she has a set of shades on as well. She’ll come across. ARIARNE MEDLEY comes through the all age trials and wasn’t disgraced.

BLUE LINE was taken up to Perth last start by Sam Faithfull and carried 58kg in a race which contained Saturday types like Harmika and Otheroneson. Finished a distant third beaten 5L but highly doubt any of these opponents would get within 5L of either Harmika or Otheroneson. Carries the weight with Tash Faithfull on and from the inside gate looks the one to beat. SILVER BO hasn’t had much luck since arriving in WA. Should win one of these soon. BETOKEN took forever to break through but should gain great confidence from that. SPEEDY PYE is drawn awkwardly but has been racing well all season.

LOSING TICKET has been a marvel for veteran hobby trainer Melda Daniels. Second behind Tri For Us two starts ago in a 64+ at Albany and then last start finished third behind Watto’s Reward and The Cat Ratcher in a high speed, high pressure Norseman Cup. Gets the right run and is in great form. Mt Barker specialist too. ONE FOR THE ROAD steps out to 1850m which is an unknown but he has returned to racing really well. Winner first-up in a C1 at Pinjarra, winner second-up in a 58+ at Geraldton and last start wasn’t too far off them in a C3 at Pinjarra. If he stays it looks the right form. CLASSIC JACK has to jump 59kg but he’s the class runner and looks to be building. THE HAWKEYE drops significantly in weight and can stay.

GARAGE DAYS looks the testing material here. Won a 58+ over 1100m at Albany three starts ago beating Sir Snugalot and Classic Magnus before heading back to town. Last start ran a narrow second to Alien From Mars and beat home Sweet Strawberry (races Thursday at Pinjarra). Drawn the middle of the line and should get midfield cover. APOLLO is rarely far from the action and with the 4kg claim for Luke Campbell gets into a C5. Has raced in exclusively tougher than this for a long while. MORGS FREEMAN was disappointing last start but maybe doesn’t get the 1500. Forgiving. STARAUTHORESS doesn’t finish out of the first four very often when drawn a gate.

LOVE DRUNK BABY is double nominated for Thursday and Friday and O’LARA’S PRINCE is double nominated for Wednesday and Friday. Interesting to see which way both trainers go because this is clearly the easier option for both of them. If LOVE DRUNK BABY starts in this he will be extremely popular. Different horse when he can find the rail and looks like leading and controlling here. Looks a genuine odds-on pop in this. Pray. O’LARA’S PRINCE has been tested over further but think he might be better suited to these sorts of trips. JULEITTE is going super but might be looking for further. ROSSO TEMPESTA one to keep safe at his SJ Wolfe debut.