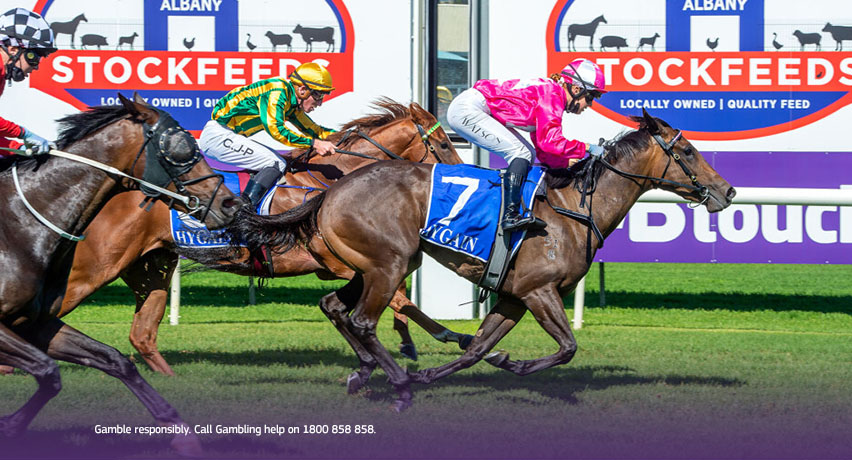 JALINDA BAY finished around the mark in all four runs last preparation in the metro and provincial area. Love the way she trialled up at Lark Hill recently and Bruce Watkins takes her to an Albany maiden first-up. Think that Jason Whiting could almost take her straight to the top and in a small and limited field think she’s a great way to get punters off to a flyer. SWEET TEA looks the danger. She’s green, she’s raw, she has an awkward looking action but she definitely has a level of ability. First-up, no trial resuming. HOT TONIC can kick through to either lead or box seat. BAKE SOME MAYBES gets respect from the Jordan Rolfe yard with CJP to ride.

PRINCE RAGNAR has been a wallet burner for punters but looked a lot more cool, calm and collected behind the barriers at his first start for Roy Rogers. Maybe with less travel and trained locally he can finally put it all together. 1200m stretched him last start, think the 1100m is perfect for him here. Joey Azzopardi has now had a feel for him and expect him to lead and go close here. Last chance for him. GINGERS SECRET was really well commissioned on debut in a tougher race than this. Drawn a little sticky but has tactical speed. LE WREN only had three runs in her initial campaign and showed promise in all of them. RIBBING trialled up really well at Lark Hill recently.

TALES OF MANHATTAN looks a map horse here. With Wuhan Warrior, Luvachat, Back In  Blue and Betoken all capable of going quickly early CJP can just park him behind the speed and enjoy the run of the race leader’s back until the home straight. Won with authority down the 1000m straight at Pinjarra after trialling like a beast. Might be ready to put a couple together. WUHAN WARRIOR will find this lengths easier than recent assignments. Like to come across looking for a position. LUVACHAT has X-Factor but still has plenty to learn. Best run of his career was with Rawiller onboard. BACK IN BLUE was thrown in the deep end last start at Ascot.

ELUSIVE DREAM brings the alternate form and as we did at the last meeting with Tizzle Top we’ll treat the alternate form as the best form. Was plunged first start for Grant Williams and didn’t get anywhere near them. Far better last time out behind Double Thumbs Up and Vitalize. This is easier again. VITAL TIMES finished second to Eldorado River in a 52+ (beating home Wild Galah), finished second to Ruby Noir and then found the staying trip a touch too far for her. Given a freshen up, back to 1500m and taking on a number of local maidens who have battled long and hard throughout the entire SW season. COLOUR ME SON and URBAN WARRIOR are two of the those horses who have promised time and time again to pinch a maiden but continue to find one or two better.

MANKIND is really well placed by Hayden Ballantyne and is a really good use of Cassey Martinan’s 3kg claim. Brings the weight back to 60kg and he was a winner with 60.5kg only three starts ago in a 60+ 0MWLY race at Ascot when beating Alien From Mars (two time winner since), Native Chimes (winner since) and Time Scale (two time winner since). That’s super form for a race like this and he should get a gun run tracking the hot tempo. LLESSUR won a 70+ at Albany in style two starts ago for Kyra Yuill. Great race for her again. SWEET SNITTY has turned a corner and gets a 4.5kg weight swing on Lacevinsky from last start. LACEVINSKY is going super for Steve Wolfe but is drawn really awkwardly.

DAD’S BIGHEADED was really god two starts ago behind Float Our Boat in a 2000m C3 at Pinjarra Park when looking to travel up really nicely behind horses and then got stopped in his tracks a few times when straightening. Was well supported early at odds in a C5 at Ascot last time out and wasn’t disgraced. Fair bit of that form on show Friday and Saturday through Tradem’ In and Keeper Sweet and from the gate and back in grade he should go well. FRIAR THE GUN bolted in last start. Was only a Pingrup grade of race but she has shown glimpses of staying ability in the past. TIZZLE TOP looks like he will stay all day. ART ADMIRER is double nominated for Monday York. Keep an eye on.

BIG BADA BOOM is on trial at the staying trip but he is a back-up horse and he is off the 8 days from a strong 66+ effort at Ascot. He lumped 60kg, he sat no better than three and four deep the trip and still hit the line. Roy Rogers elects to take him to the Albany Cup and while he is unproven at the trip, he’ll go round double figures and he has serious X-Factor. Kind of horse who could win or run last. Price is the key. TENA KOUTOU and SOWAR have met a couple of times and there is very little between them. They will both get back and join the three deep train in this event. MORTONS FORK should be about ready and has been aimed at this race ever since he arrived in WA.

TREVELLO was excellent at his Roy Rogers debut and with Brad Rawiller jumping on from an inside gate should get the run of the race. Got shuffled back further and further in the race last start and then flashed up along the inside through traffic. Historically has always been a barrier and a map horse. Great race for him. CAROLINA REAPER is a last start winner with Cassey Martinan aboard and he simply ran them into the ground. He beat Garage Days that day and he has since won a C3 at Pinjarra and will be well thought of in a Westspeed Platinum on Saturday at Ascot. See no reason why he can’t cross and lead again and take running down. MR CAUSEWAY burst on the scene in Albany in December/January. WISE WORDS will keep fighting.