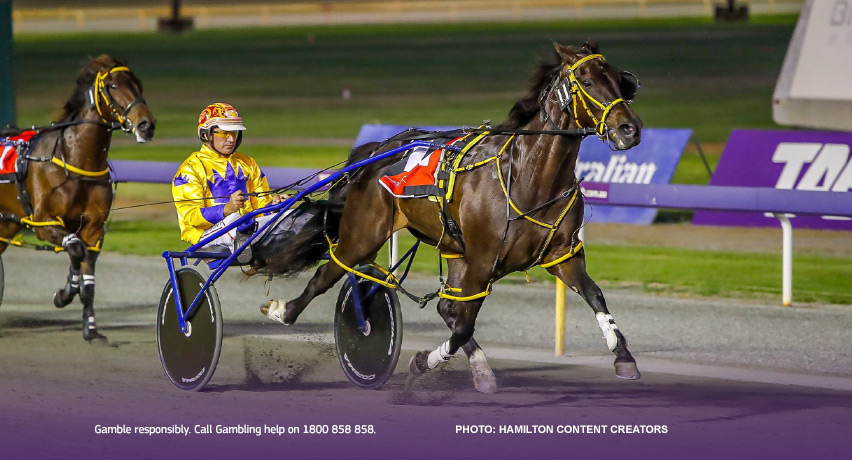 He will round out his preparation for the Cups this week in the Pat Cranley Memorial. Stuart McDonald picks up the drive on the champion due to Gary Hall Jnr missing with suspension. A lot will depend on the draws again this week. He’s had the draw advantage on Shockwave the last three meetings so he may be due for a tougher draw this week. After last week’s Free-For-All Shockwave looks the only logical danger to Bully.

As mentioned above, he’s the only legitimate danger to Bully right now. It would take something extraordinary from anything below him in these rankings to get past him for second place. He’s low flying and if he gets the draw advantage on Chicago Bull this week he’s going to take some beating.

Following Friday night’s runner-up finish to Vampiro, Galactic Star now looks the best placed of the Bond team for the Cups. Six weeks ago he looked a fair way from it and probably the third or fourth in line. Now he looks the main player. Very good to work to the breeze and hang on for second to Vampiro on Friday night. If he gets a chance to be the swooper late in one of the Cups he can run into the money.

Got another chance from barrier one on Friday and this time he held off Galactic Star. Still has the x-factor of that brilliant early gate speed which he could use in one of the Cups. He doesn’t look to be going at his absolute top right now, but you would back the Bond team to have him cherry ripe for Cup night.

He might not make the field, but I don’t envy the handicappers who have to make the decision to put him in or leave him out. He could be the horse that makes this year’s Cups series, much like Shockwave did last year. It’s an enormous step he will have to take to make Free-For-All racing, but he looks like a serious horse in the making.

This was the run of the race in last week’s FFA. He’s the veteran of the field and rarely puts in a bad one. Hit the line nicely on Friday night and was the first non-Bond runner home. Has got the scalp of Chicago Bull this year as well which is nothing to be sneezed at. His two runs back suggest he could be going as well as he ever has for a Pacing Cup campaign. If he drew to lead he would take some catching as well.

Honourable mentions: Mighty Conqueror was only fair on Friday night. I’m not giving up on him, but I’m not convinced he’s going anywhere near as well as he was last year. Stroke Of Luck is still around the mark as well. Keep an eye on Perfect Major too, but it may just be a case of these races coming up a bit too early for him. Argyle Red also wound back the clock in the last race on Friday night and beat a very handy field. He probably deserves his first crack at the Cups as well. You could also make a case for the winner of the Mares Classic to make the field as well. With Our Alfie Romeo, Balcatherine, Wainui Creek and Gotta Go Gabbana all on song for that feature, they could be around the mark for a Pacing Cup start.