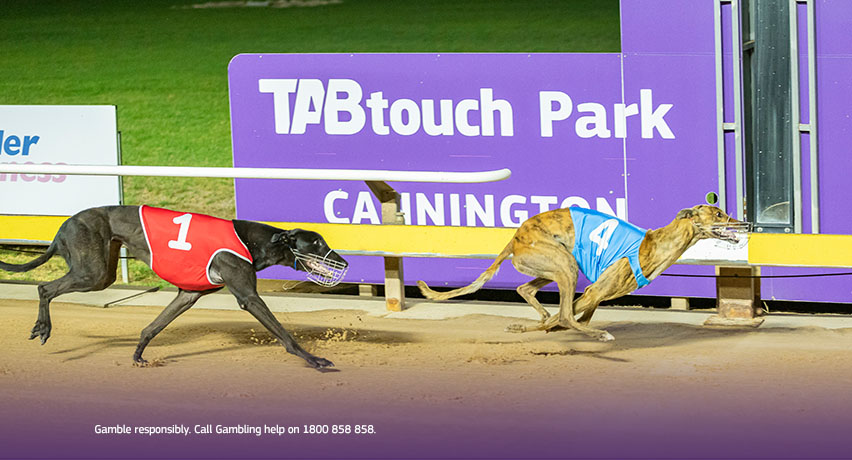 In electrifying form presently and while the 1 box doesn’t usually suit him, he has a surprisingly good record off inside draws for a dog who gets as wide as he does. Last two starts sublime and only needs clear running to win.

Impressive youngster who moves to an inside draw for the first time. Showed good pace off the outside last week but wanted to rendezvous with the fence very quickly. Won’t face that issue here and can use his pace muster to punch up and be the one to run down.

Great race. Intriguing. The 3 is racing well and while he is stepping back to the 520m, he is tractable and can handle it no problem. Has pace and sticks and gets a good map here. None of that will matter if the fawn fireball in box 5 gets a look at any stage. The draw and his box manners means we get black odds but he has been known to offset both. Not a shadow of doubt in this author’s mind that he is the fastest dog one out in WA. We are not racing one out however. Regardless, any luck and a clear running and this is over. He warrants the save.

The 8 is racing better than ever and while it’s been a long time coming, her recent efforts have been when it’s raining. If she gets similar conditions, she could again into a place at least. The 6 simply can’t draw a box but he has the talent to win. Just a matter of securing a good first turn run which he can do with the vacant box inside. This fav can win, no doubt, and he’s a gun, but questions still need answering and at $1.70, I’d rather someone else ask them this week. He’s an even money shot and I doubt we get that. So we play EW and spec.

Unbeaten over this track and trip and has that dazzling turn of foot the breed are known for (Simon Told Helen, Who Told Stevie etc). Back to his very best last start with a good Mandurah win. Only has to step and dash up out wide here to be a major force in the finish. Great show.

His risky box manners mean he has lost races he shouldn’t have in the past. Seems to have improved them to a more consistent level lately and is boxed to sweep into this quickly. Keeps attacking the line with sustained run homes and can hit top 2 here to take us out.

The 8 was enormous last week and is finally showing his best form on a more consistent basis. Has a big middle and last section and only needs clear running to win this final. Great EW show. Had the 6 drawn a better box, I would have declared him. A real talent who got the money for us last week in the heat with a blistering turn of foot after the start. Drawn tricky but if he fires out, he can offset the box. EW save there as well.

A couple of regulars who have been found back in a suitable race. Forget the 4s form, if he steps and leads, he’s a very different dog and very hard to get past. Don’t dismiss him. The 7 goes much better at The Meadows than Sandown Park and will be there if she can get over early. Sticks on well and will be a price. Small goes here EW but they both can run races.

Will be any old price but make no mistake, while he doesn’t have his sisters ability (Wow She’s Fast) he has plenty of his own. A very different dog to her, he can be awkward and get back on occasion but has a booming set of sections in his weaponry and when he is allowed to run, can be almost impossible to hold off. Huge price in this final, he will improve again and if he gets any sort of look at all, he will make them pay. Place heavy go here.

The 4 is furnishing into a lovely stayer and she showed last start that she can get the trip and will only improve. Has pace and chases hard, she will again go forward and be hard to get past. The 1 is debuting over this trip and she gives every indication she will get it. Runs the 600 out strongly and has been racing some of better middle distance dogs. Will give a sight here.

Was very disappointing last week. Got into a spot where he shouldn’t have been stopped but failed to come on with his big last section and missed a place in a race he should have won. Prepared to forgive him and give another chance.

and No. 4 Call Me Buster

The 3 has one of the biggest motors in greyhound racing and any sort of clear running sees her in most finishes. Her last 2 runs at Shepparton proves that yet again. Huge efforts. She also goes very well here. Hard to beat. The 4 will get a nice run here and he has been racing tougher opposition so will enjoy the drop in company. Strong and can run time when he gets up there early. Good save.

Still racing as well as ever and perfectly suited to Masters company. Can unleash a big run home and only needs to hold a first turn position to become extremely hard to beat.

While I have a huge wrap on Throttle in the West, the arrival of this bloke in the East is just as exciting. Stewards trialled here in 29.65 last week but only went 5.55 early. That’s remarkable considering the track wasn’t even fast. Beat Zipping Kyrgios in a match race and not many can do that even if Kyrgios isn’t at his best. Runs scintillating fractions when he’s mobile and is a group 1 star in waiting!!! Box his only concern here but can handle it. If he can find the front, find your bookie.

Was a good run last week when getting a chequered passage and hitting the line hard. That was his best run here for a while and he holds his form when he finds it. Strong and well boxed wide, he can get into this at good odds and will be look threatening late.