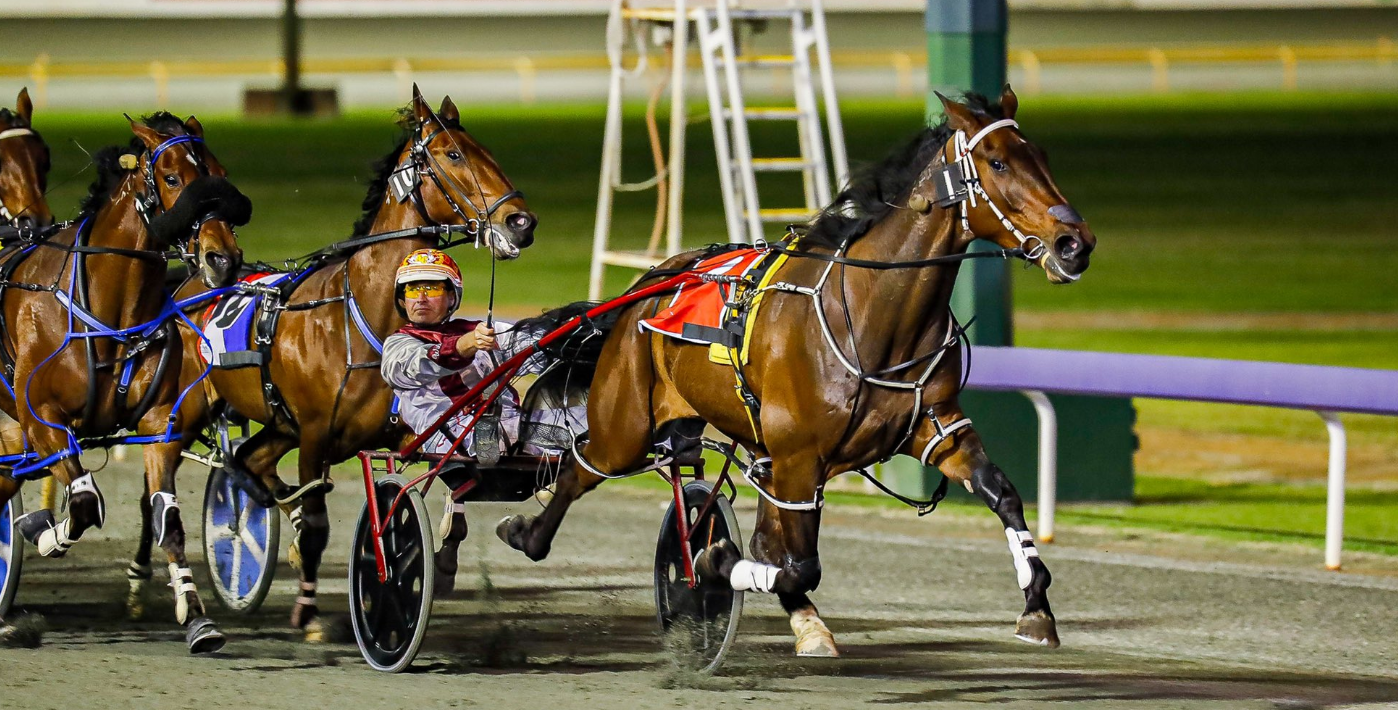 FINVARRA (2) was a dominant 1.54.9 winner on debut before facing the breeze when 3rd to STROKE TEAM (10). He is drawn inside his main rivals tonight and will be very hard to beat if he can find the front. ELDAYTONA (5) led and was narrowly beaten in track record time at his last start and is the obvious danger. EL CASANOVA (11) has shown plenty of ability in his two race starts and has a nice trailing draw. STRIKE TEAM (10) upset the favourite at his last start but isn’t as well drawn tonight.

BAYLAN JETT (7) ran a snice 2nd here two starts back before having. O luck at his last run. He is one of the few horses in this field who can work in the run and looks a good chance in a wide-open affair. DESTINED TO RULE (1) ran on strongly to finish 2nd here on Monday and is a great each-way chance from the pole. BLACK JACK ZAC (3) gets his best draw for some time and is racing consistently. MISTER ARDEE (4) charged home from the rear to finish 4th here last week and will be running on strongly again.

MISTAHMISTAH (1) led throughout when dead-heating with Miss Limelight at his last start. He ran 1.56.5 on that occasion and a similar performance will see him being hard to catch. SERGEANT OATS (2) has been placed in three of his last five starts and won’t be far away from this draw. THATS PERFECT (9) has shown plenty of ability in his three WA starts but has a tough draw to overcome. TRIROYALE BRIGADE (6) has impressed at his last two runs but both have been from the stand and he is back to the mobile tonight.

PATRICKTHEPIRANHA (4) faced the breeze when a game 2nd to Patronus Star here last week and will appreciate a drop in class tonight. YES HES A LADIES MAN (1) has impressed in winning five of his seven starts in WA and will be hard to catch if he can hold up at the start. THE LAST DROP (10) ran 4th to YES HES A LADIES MAN (1) at his last start and can be placed from this draw. ROCK ME OVER (2) isn’t racing at his top but will be handy in the run and should be thereabouts.

GALACTIC STAR (4) has been racing consistently from bad draws and gets his chance to dominate this event from the outset tonight. VULTAN TIN (12) won the WA Pacing Cup three starts back and is suited by the staying journey tonight. BLETCHLEY PARK (6) led and ran along when 2nd to Vampiro in quick time at his last start and can be dangerous with the right trip. STROKE OF LUCK (2) hasn’t drawn this well in quite a while and can play a part.

SOMEBEACHPARTY (10) hasn’t finished back than 2nd in her ten starts this time in. She is clearly the best mare in the field but does have an awkward draw to overcome. JUST MAKEMINE DIAMONDS (1) ran a 14m 4th to the favourite at her last start but has the advantage of the pole draw here. HEADLINE ACT (3) has finished just behind the placegetters at her last two starts and should be thereabouts from this draw. RADIANT AMBER (5) is a quick beginner who has the hood added tonight and can give some cheek.

PRINCESS MILA (13) is back to her best and has won her last three on end. She has a 30m handicap to overcome but is the class trotter of the field and the horse to beat. SUNNYS LITTLE JESTIC (3) has only been placed in one of his three WA starts but has shown he can be dangerous if he puts it all together. ALWAYS A DREAMER (4) has won six of her last ten starts and must be considered again. CHAMPAGNE PRINCE (6) defeated the favourite four starts back and has very good manners.

ALTA CINDERELLA (3) has won four of her six career starts and impressed on Monday when a dominant 1.55.5 winner after starting from the back line. She is better drawn tonight and appeals as the one to beat. FIFTY FIVE REBORN (1) has been unplaced at her five starts this time in but can play a part from her pole draw. MISSTIANO (10) has been placed in four of her five starts this time in and can be in the money again from this barrier. SAVVY BROMAC (6) won three on end before being caught in the breeze last start and won’t be far away.

TAROONA BROMAC (2) led when a game 2nd to Justasec on Monday in slick time. He is one-dimensional in that he has to lead but that looks the most likely scenario here. MACHS GOLD (1) is known as a sit-sprinter and would be dangerous on the leaders’ back but may elect to hold up from the pole. MR KIWI (6) disappointed first-up but will be fitter for that effort. JESSE ALLWOOD (10) is drawn to get a soft run on the pegs and can be dangerous late.

THE KRAKEN (1) hasn’t finished further back than 4th in his last six starts without being in the winners’ circle. He should get his chance to lead tonight and will give them something to catch. ALTA BLUES (4) chased hard when 5th to Magnificent Storm here in sizzling time last start and will appreciate the drop in class. PARMESAN (3) has won 14 of his 22 career starts and looks the other winning chance. ANTERO (9) is racing extremely well but the wide draw makes it tough.

Suggested Bet: THE KRAKEN (1) to win.