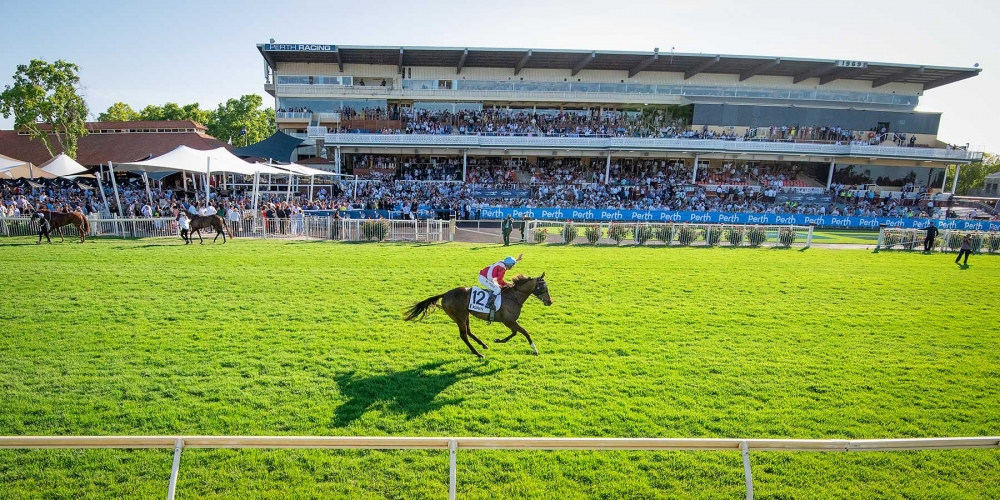 There is something very special about the Railway Stakes over the famous Ascot mile. This year’s edition of the great WA race might not possess the same quality as we have witnessed previously, but it will mean little to the massive crowd expected on course and to the successful trainer, jockey and connections. Not only is it worth $1 million, it is a Group 1, one of only three staged each year here.

The best thing that could have happened to the NBL was American teenager LaMelo Ball being selected early in yesterday’s NBA Draft. And that is exactly what occurred. Ball, who was a revelation and created enormous headlines worldwide during his stint with the Illawarra Hawks last season, was snapped up with the third pick overall by the Charlotte Hornets, owned by none other than the redoubtable Michael Jordan.

The Golden State Warriors’ championship hopes were crushed this week when perennial All-Star Klay Thompson ruptured an Achilles during a workout in California. Having missed last season with a torn ACL, the three-time championship guard will be forced to again watch on as the Warriors seek to rebound from an injury-impacted campaign.

Many did exactly that when news dropped that Mark Purdon and Natalie Rasmussen would be ending their All-Stars training partnership on December 31 to take a 12-month sabbatical. The most successful training operation in the history of the sport in New Zealand, Purdon and Rasmussen will leave a void in the industry on both sides of the ditch. Sometimes we don’t fully appreciate what we are witnessing until it is no longer with us.

It was certainly a lot easier to watch the WA Champion Fillies Stakes on replay for the large group of female owners than it was in real time last weekend. The daughter of I’m All The Talk and Indigo Blue found themselves locked together in a two-horse war in the straight before Watch Me Dance poked her nose out to prevail. Two of her four wins from 10 starts have been at Group level and one of her runner-up placings came in the Group 2 Karrakatta Plate. A terrific filly.

The Retravision Fremantle Cup at Gloucester Park this evening was given the kiss of life it needed on Tuesday morning when Shockwave drew inside his chief rival Chicago Bull. Having had to settle for multiple placings behind Bully by virtue of unfavourable barrier draws, Shockwave came up with barrier three, while the Gary Hall Snr-trained star was handed six. The pair are understandably firm in the market and opinions are divided. A heavyweight contest awaits.

That is what the rivals of Dustin Johnson were this week when the big-hitting, loose-limbed American strolled to victory in an historic edition of the US Masters. The 2016 US Open champion was in danger of finishing his gifted, but controversial career as a one-major player until he produced four quality rounds at Augusta National to earn the honour of being presented with his green jacket by Tiger Woods in the Butler Cabin.

Groans could be heard throughout the State when Steven Parnham came crashing down from Powerful in race two at Ascot on Wednesday. Granted, it could have been far worse, but a fractured collarbone and three broken ribs in the week before you partner boom mare Kay Cee in a $1 million feature on day one of the TABtouch Masters is just wretched luck. Here’s hoping Steven can have a speedy recovery.

Dom To Shoot didn’t prevail in the Listed Fairetha Stakes (1400m) a fortnight ago, but he lost no admirers. Dragged back from his wide draw by Paul Harvey, Dom To Shoot was a victim of a slow pace set up front and could not win from where he was on the corner. The prospect of a more genuine tempo tomorrow in the Group 2 WA Guineas (1600m) will work in his favour and though he hasn’t come up with an ideal barrier, he is sure to be there at the business end.

Despite being an invaluable member of West Coast’s 2018 premiership and a great indigenous leader for the club on and off the field, Lewis Jetta is no longer in the nest. The 31-year-old was yesterday officially notified that he would not be offered a contract for 2021. It remains to be seen whether he will offered a lifeline, although the odds of that occurring are lengthening. Even if one isn’t forthcoming Jetta can be extremely proud of his career.

Ranveer. The son of freshman sire Winning Rupert will make his debut tomorrow in the $250,000 Magic Millions 2YO Clockwise Classic (1000m) at Ballarat. Mornington trainer Matt Laurie purchased Ranveer at this year’s yearling sales here in Perth, parting with $200,000 to acquire the imposing youngster who was offered up by Western Breeders Alliance. Ranveer gave an insight into his ability levels when he was an impressive winner of a jump-out at the track late last month.

William Pike has had a mortgage on the WA metropolitan jockey’s premiership since 1967. Ok, that might be a stretch given he wasn’t born then, but it does seem like an eternity since Pike hasn’t been top of the pops in the jockey ranks here in Perth. With his stint in Melbourne over and quarantine requirements since arriving back in WA concluded, he now can set about running down the lead Chris Parnham has established in his prolonged absence. Parnham holds a 45-win lead over Pike after booting home 48 winners already. Will it be enough?

Maybe it’s time for all the NSW rugby league geniuses out there to put their hand up and say the following … I WAS WRONG! Those willing to dub the Queenslanders the worst State of Origin side ever would have been looking for somewhere to hide after Cameron Munster donned his Superman cape to guide the Maroons to a stirring game-three win on Wednesday night. Concussed early in game two and unable to return, Munster was an irresistible force in games one and three to lift Queensland to arguably their most famous victory.

The NBL displayed terrific leadership when it announced the deregistration of Brisbane Bullets training player Najael Young for failing to undergo a COVID-19 test and then self-isolate as requested by the Queensland Government. The NBL has been pushed back to a January start because of the pandemic and any player who refuses to adhere to the guidelines laid out by the league and higher authorities deserves to be dealt with.

The criticism of Jai Arrow for his post-tackle treatment of James Tedesco in the State of Origin decider was not unexpected. Unaware that Tedesco had suffered a brutal head knock in the tackle, Arrow pushed him to the ground in the aftermath. It is something rugby league players do time and time again. But as soon as he saw the state Tedesco was in, Arrow raised his hand to alert medical officials that the NSW skipper desperately needed assistance. Blues coach Brad Fittler’s claim that Arrow had performed a “grubby act” was poor.

Many AFL fans were left shaking their heads this week when the league announced three tweaks to the game’s rules in 2021. It might be time however for those same supporters to brace themselves for a seriously big lever to be pulled at AFL House in the not too distant future. You just get the feel these latest rule changes are the calm before the storm.

Last week in this column, we said it was the right time to Bow To The Queen — a mark of respect for the spring accomplishments of Arcadia Queen. Anytime a campaign contains two Group 1 victories and a Group 1 placing like Arcadia Queen’s, the plaudits are well deserved. This week, it is time to salute the efforts of another Queen in the cerise and white — Celebrity Queen. Her effort to elevate from a ratings race to triumph in the Group 3 Colonel Reeves Stakes (1100m) last weekend was simply outstanding.

Racing Victoria’s decision to boost the purse of tomorrow’s Ballarat Cup to $500,000 last year resulted in a good field. However, the strength of this year’s field is even more impressive and proves once and for all that money speaks all languages. Last Saturday’s Zipping Classic, a Group 2 WFA feature, was run for just $250,000.

Wonderful news out of Fremantle’s Cockburn base this week surrounding David Mundy. The evergreen midfielder/forward put pen to paper on a one-year deal that could well see him move past Matthew Pavlich on the all-time games-played list at the Dockers. Mundy (332) has a way to go to overhaul Pavlich (353), but it is terrific that he will be afforded an opportunity to chalk up 350 appearances and help in Fremantle’s push for a return to finals.

Tommy Shelby had no luck at his most recent outing. We can all agree on that. Likewise regarding the need for Tommy to do everything right from box rise in the heats of the Melbourne Cup at Sandown Park tonight. It is a heat stacked with talented chasers. In saying that, Tommy’s best is more than good enough.

It has been anything but smooth sailing for Cricket Australia this year. They have encountered massive fixture delays regarding the international summer and are still working through how the Big Bash League season will look in the New Year. The cluster of COVID-19 cases in Adelaide this week forced those at the game’s Melbourne headquarters to think on their feet and implement contingencies just in case the first Test against India is unable to take place under the Adelaide Oval lights.

This year’s AFL national draft will be a virtual event for the first time. The date has been set for Wednesday, December 9. As with the AFLW lottery last month, the selections will be witnessed on Fox Footy, with the pre-season and rookie drafts taking place the following morning, albeit with no draftees in attendance.

Last Saturday it was the locals in Newcastle who had their chests puffed out with the running of the $1 million The Hunter (1300m). Tomorrow, it is time for those in Wollongong, roughly 70km south of Sydney, to enjoy their moment in the spotlight with the staging of the The Gong, also worth $1 million but run over 1600m. Mister Sea Wolf is back to defend the crown he won almost a year to the day. He will need to elevate however because the field is stacked with quality performers.

Plenty of the world’s best young basketballers will be signing on the dotted line over the next 48 hours after being selected in the 2020 NBA Draft. The coverage of the lottery took on a different look this year because of the COVID-19 pandemic, but the storylines remain alluring and the raw emotion from the players and their families when interviewed absorbing.

Screamed the back page headline of The Albany Advertiser yesterday in reference to the Kirin Railway Stakes prospects of local star Red Can Man. It was terrific to see and there will no doubt be copious amounts of Emu Export, affectionately known as Bush Chooks, consumed if the Gingerbread Man gelding salutes fifth-up for Steve Wolfe and Shaun McGruddy,

South Australian Premier Steven Marshall adopted that approach this week when he enforced a hard, six-day lockdown in order to control a cluster of COVID-19. It meant horseracing was affected, as were numerous businesses. What it did do also was give the State an opportunity to get in front of the virus and perhaps save the first Test between Australia and India next month being moved away from Adelaide Oval. Now we wait.