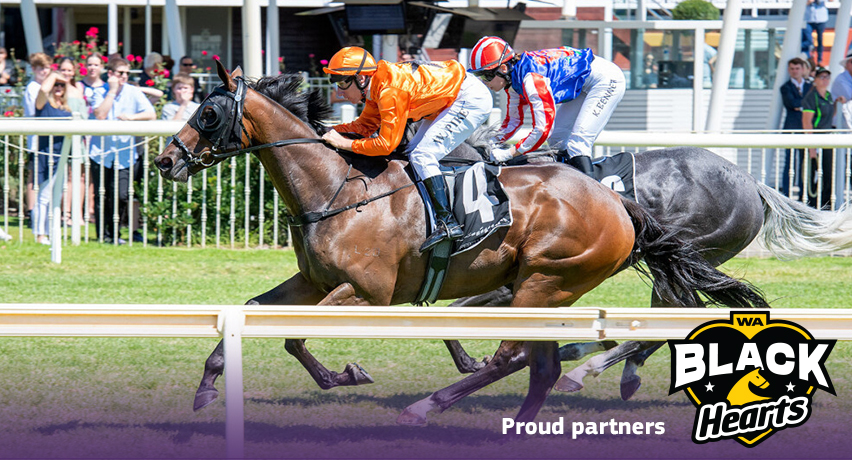 BREAD TO FLIRT was hitting the line well on debut down the 1000m straight behind Miss Livinia and Miami City. Improved again second-up when going down by a narrow margin. Steps up in trip, drawn to box seat and showed on debut she’ll get through any rain affected track conditions. CELEBRITY MAN will bring a lot of attention being a Redoute’s Choice debutante out of a gun race mare in Celebrity Miss. Likely to settle at the rear but looks more than capable of gunning them down. MIAMI CITY is becoming a little frustrating to follow. Form has certainly held up through Lonehand Larry and Paeroa Lad. GOLD MERITS was a trial Rosie Mahony will never forget; super job to stay upright.

DIVINE PAIR comes back in grade and back in trip to an 1100m race where he can park just in behind speed horses like Son Son, Kick A Goal Son and Born Spicy. Toyed with them on a soft6 at Pinjarra Park so any rain will only enhance his chances and he has been racing very well this campagn. SON SON is weighted brilliantly. Stays in the same grade and drops half a kilo after the perfect use of Laqdar Ramoly’s claim. TIME SCALE won a strong C1 first-up but this looks tougher again. KICK A GOAL SON can lead or box seat.

EMPIRE REIGN was afforded no luck first-up when plunged in betting. Steps straight up to 1400m and is drawn to get the camp on either New Amsterdam or Prize Pursuit (could even take it up there’s that little speed on paper) and from there can bounce back. Form when last in work is definitely strong enough to be winning a midweek C3. NEW AMSTERDAM trialled up particularly well and then was handed the race on a silver platter first-up. Sent to the breeze by Rawiller in a race where they went 11L slower than average first 800m. PRIZE PURSUIT ran well first-up and can slide across from the draw. KING OF JUDAH an improver in this grade.

TRI FOR US did all the work on debut on a soft7 track when only grabbed in the shadows of the post. Defied an unbelievable betting drift second-up to score an emphatic victory and looks a filly on the rise. From the draw Chris Parnham will have her right over the top of the speed and she looks Saturday class to the eye. DIVINE QUEST backs up off 7 days after running into a smart staying mare last week. Form should hold up. ARAGAIN lost no admirers first-up and might be better suited outside than inside with the way she races. REGAL DIVIDEND is 7 weeks between runs and should roll to the top.

Suggested Bet – TRI FOR US WIN

MERCANTO ran a ripper first-up in Saturday 3 year old company when hauling late ground off talented gelding Iseered Iseered. Second-up missed away (bit of a habit for him) and after that it was ugly viewing for connections. Still new and raw and again likely to settle in the back half, but if he stays out of traffic he can bounce back. PLAYING RED seems to grow a leg in the wet. She’ll be back in the field and doing her best late. BOSNIPP will be at the opposite end of the map. Loves to roll and comes back to C1 company. GOD’S BUSINESS was impressive on debut, albeit in a lowly maiden handicap.

BLACKWATER BAY resumed first-up at 1800m and was caught deep in the early stages. Pike elected to roll forward in a race which was being run at a pedestrian tempo. Gave a kick turning for home but was gunned down late. Query on the form with Lyle’s Choice and Friars Fantasia both only moderate (at best) on Saturday, but he does come back into a C1. STREET FAIR loomed the winner last start and had genuine excuses in the final strides. Hard horse to trust. MISS MARANTA has hit the line powerfully in two runs back. She’ll concede them a head start but looks to be going well. ZIP ZAM ZOOM was just as good as Blackwater Bay last start but concedes him 1kg here from that race.

HEART OF COEUR gets his chance in a wide open and evenly graded mile. Was beaten 3L last start but from an awkward position in running ran the fastest last 1200, 1000, 800, 600, 400 & 200 of the race. Senior rider on means he’s worth a throw at the stumps. TRADE THUNDER won well at Geraldton and is far better suited stepping up in trip. Starting to build an impressive record. MY GREEK BOY hasn’t seen this grade for 4 years and maps beautifully on the back of his stablemate. CHASING CHAOS was the target of smart money last start. Ran out of his skin.