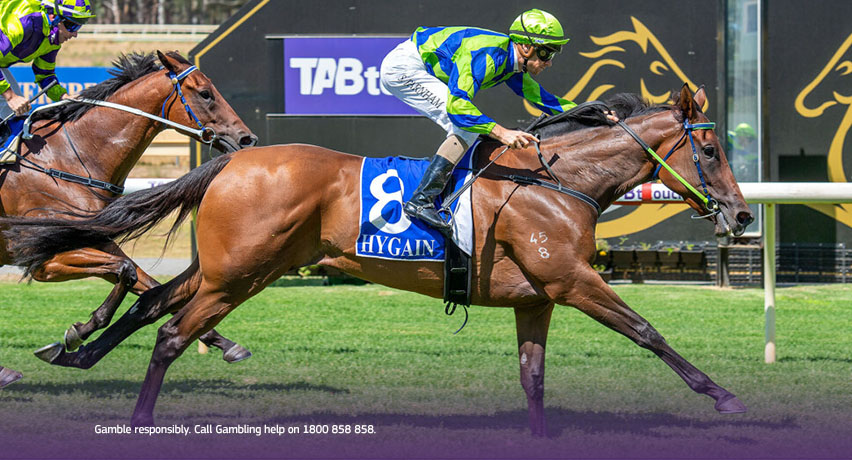 CELTIC GREY finished second to Dadirra three starts ago, third to Forty Niner and He’sgotwings two starts ago and then struck a Heavy9 last start down the 1000m straight when she simply never looked comfortable at any stage. Forgive, forget and follow up. This is winnable for her. SERVICEMAN has been a frustrating horse to follow over his career. Clearly has ability but tends to find bad luck. Can’t imagine Paul Harvey mucking around, expecting to see him kicked out of the gates here. CHERRY CAN RUN is an honest type of filly who should find a maiden this preparation. FRIES WITH THAT is quite one paced, possibly the set of shades can find him a length or two.

POSITIVE IMPACT has had a number of trials across two states. Never made it to the races in NSW after trialling at Hawksbury and Randwick in Feb/March 2021 when trained by Stephen O’Halloran. Most recent trial for Lindsey Smith under Paul Harvey was excellent and looks your classic ‘works through his gears’ type. On debut at 1400m looks suitable and he looks hard to beat off the trial. STAR IN TIME showed glimpses of ability from time to time when ridden by Ryan Hill. He now takes over training of the mare and she looked sharp in a recent back straight trial. LOOK HERE PUNK and MOLLY MAGEE will eventually find maidens.

ZOOROPA made his debut on a Heavy8 at Pinjarra over 1500m when finishing third behind Hezazeb and Look Here Punk. Not sure of the depth and quality of that as a form reference (Hezazeb got beaten at Roebourne on Saturday…) but for a 3 year old to grind his way through the heavy track conditions was full of merit. Paul Harvey riding for SJ Miller gets you excited and at start number two he can kick through to lead and control. Hard to run down. FAT ROY SLIM comes through the same race and there wasn’t much between them. ARTIENNE is a perennial place getter who will keep whacking away. VITAL TIMES gets back and needs luck. Had plenty of chances.

ROMANCING THE ROCK finished second on debut from a long way back and then again got out of his ground and finished off well behind Market Stryke at start number two (with that galloper going on to make the form look good at his next few outings). The 950m trial win was dominant (over 4.5L) and while 1200m will probably be on the short side for him he looks hard to beat at his return. NOBLE BORN goes round favourite more often than not. We finally get to see him in a set of blinkers and he does have huge raw ability. Two horse race and both with plenty of upside. Follow the pair. NITRONIC is stiff to run into two classy maiden types. Has a maiden in him soon. LA GALEXIA will be doing her best late.

TOO MUCH TALK was absolutely plunged in betting last start coming out of a solid second behind On The Full (beating home subsequent winner Star Soprano). Struck a Heavy8 and never really travelled the winner in running when a distant second to Magical Gem. Blinkers on, drawn well and looks ready to win. Arguably a weaker race than what he went around $1.65 in last start. TWICE A FORTNIGHT clearly has ability. The wide draw doesn’t help but if he can get a half decent run in transit, he looks a legitimate danger. GARDEN QUARTZ hasn’t shown much at the races but every time she has trialled, she’s looked to have something. THUNDER OF GUNS is the debut runner for Lucy Warwick as a dual licence trainer/jockey. Think we all expect her to make it as a trainer and so he should go well first-up.

OLY’S CHOICE looks a stand out for the week. Strong win on debut, not a whole lot of luck when well supported at start number two and then was three deep the trip in a 3 year old 0MWLY when second to Let’s Galahvant (beating home Magnificent Andy). This is lengths weaker than that and he should get a gun run from the barrier. Looks awfully hard to beat. MAMA TEMBU returned to a bit of form last start. Great to see her back somewhere near her best. IM NOT FOR SALE is hard to catch but when he turns up he has a decent turn of foot on him. PLEASE GOD will slide across looking for the front.

STYLAX is currently bouncing between the provincial and metro area and each and every time he goes back to provincial grade he seems to go well. First-up C1 winner at Pinjarra with 60kg, second-up into a 60+ was a solid fourth behind Warm N Fuzzy, Via Monte and Alsephina, third-up back to a Pinjarra C3 with 59.5kg and won well when backed off the boards and then last start back to a 60+ 1400 at Belmont when 2.6L off them. Here we are again, back to Pinjarra and back to the on top selection. Maps well and well placed. DAZZLING DANE is ready to win one and can finish off powerfully. RUN D’AFFAIRE RUN found a perfect track condition/pattern to suit last start and duly saluted. MIDNIGHT MYSTERY can position up closer here.

FOREVER AUTUMN trialled nicely and ran well first-up behind Storm Commander in a handy C3 1000 at Belmont Park. First time down the 1000m straight is always a query but at least he is drawn on the ‘right’ side in barrier 12. Should have sufficient speed to hold a position and is closing in on another win. PONYO is a jump and run type who should be suited to straight 1000m racing. Great use of the 3kg claim. CANTO DE GUERRA will come out running and look to hold the outside rail. Proven 1000m Pinjarra commodity. CASH AWAY was a nice little surprise packet last preparation and won off 140 days without a trial down the straight. Resumes off 138 days here.