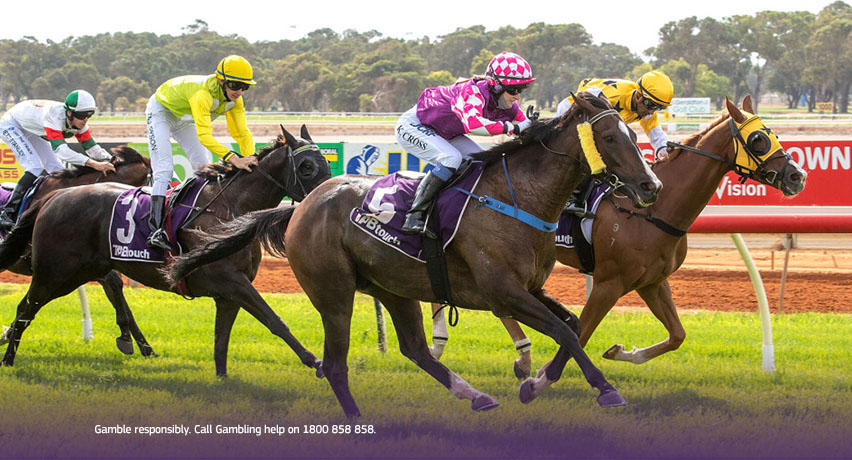 MINNO should finally break through after a string of minor placings this campaign. Yet to win one but also yet to finish out of the money in five runs this prep. CJP returns to the saddle, drawn in gate 2 to stalk the speed and should have too much firepower late. BETTER IN KIT gets her opportunity to lead them up. Real hit and miss mare who has not fired a shot her last two. BRISANCE has a host of gear changes made second-up. Trialled up well but was poor fresh. POP THE MOET continues to knock on the door for that elusive first victory.

BE OPTIMISTIC is part of LK Fernie’s travelling team to Geraldton on Cup Day and looks to have found a really suitable race. First-up, no trial, but last seen in the Group 3 WA Guineas after finishing fifth in a maiden behind My Marlaina. Clearly the stable has had an opinion of the filly over the time because she has rarely raced in maiden company. Time to step up and show something. MISS EUGEN was backed off the boards last start and ran well. Coming back in trip looks suitable for her too. SECRET LAIR was well supported first-up and ran alright. Drops significant weight after the claim. I’M BELEIVABLE looked really one paced in his first campaign.

CELEBRITY WITNESS looks to have found a really winnable race here. Held up on multiple occasions last start behind Recapitulate (a race which has produced subsequent 66+ winner General Grant) and even first-up she loomed before peaking late. This is easier than her first-up or second-up assignments and the stable show confidence sticking with the senior rather than claiming. Nice race for her. HONORFIC was 61 days between outings and had bars on last start. They now come off and he is off a more traditional spacing. Going super. DJANGO DREAM comes back in trip and Adrian Tiver makes a key gear adjustment. ARABIAN RICHES has promised to win one all campaign.

FOXY SON resumed in a 3 year old 0MWLY at Ascot when finishing less than 2L off Diamond Blue, Wuhan Warrior and Disco Donut into fourth placing. Should only improve for the outing and comes back in grade to Geraldton where he won his maiden. Comes across into a commanding spot and should be there for a long way. GREEN AND SHADY has a placing behind Buzzoom next to his name. That form stands out for this and if LK Fernie brings him to Geraldton he’ll demand respect. SPEIPNIR was only moderate at his WA debut and then was a different horse on the rain affected surface last start. Can he reproduce? POPCORN TENDER is looking for further but building.

THREE SESSIONS is a promising type from the yard of Barry Newnham. Had four runs to start the Geraldton season and won each and every one of them. Won a maiden, a C1, a C2 and a 58+ and flashed huge potential. Resuming here without a trial and Peta Edwards takes over riding duties from Nicole Hopwood. If he finds the front, he’ll be mighty hard to reel in but don’t think he’s any certainty of crossing Run For Money. DARK MISSION is well suited to these c70+ races. She normally flies fresh and just needs to stay in touch with them in the middle stages. SAVAGE ONE is always hard to beat in this grade. Does he come out positive in an attempt to breeze? SIGNIFICANT HERO is racing a little below his best.

ELIMINATE is still searching for clear galloping room 23 days after being a moral beaten at her most recent outing. Showed huge potential early days for Neville Parnham and then went right off the boil. Now in the care of John Reynolds and looks back to her best and loving racing in the Midwest. Unfortunately, Tash Faithfull isn’t available so Patrick Carbery is the lucky beneficiary of a big winning chance. She’s flying. STELLA FAIR is taking all before her so far this campaign and Adam Durrant is putting on a placement clinic in the process. Find me a better placed horse this campaign. I’ll wait. Capable of burning the candle at both ends. DARK PEAK won well fresh and only improves up in trip. CORN COB is a nice three year old but is probably ready for the paddock.

OFF WEGO won a moderate 60+ at Pinjarra four starts ago but has seemingly got the winning feeling back in his legs and is now really attacking the line. Went down to Esperance and won the Esperance Cup, got the better of a highly in form Float Our Boat late last start in a 66+ at Pinjarra over 2300m and now heads up to Geraldton in an attempt to add another trophy to the cabinet. Lovely race for him and a proven weight carrier. SLUICE BOX has to be one of the most unlucky horses in the State. Amazing to watch his replays over the last 2 months. Troy Turner could be the difference. SUGAR CAIN is a model of consistency and rarely far from the action. OUQBA TED gets down to the minimum and loves Geraldton.

LOVE DRUNK BABY looked a special at Mt Barker last start. Didn’t quite shake off the tag from Juliette like most would have expected but he still got the job done. Extra 100m, extra 1.5kg, he might be vulnerable late and he is likely to be on the short side. Punter beware. THE SINGING TIGER is no star but he’ll stick on throughout. MASTER MOORE isn’t going too badly and should position up. BUSH ICON gets a soft run along the fence.