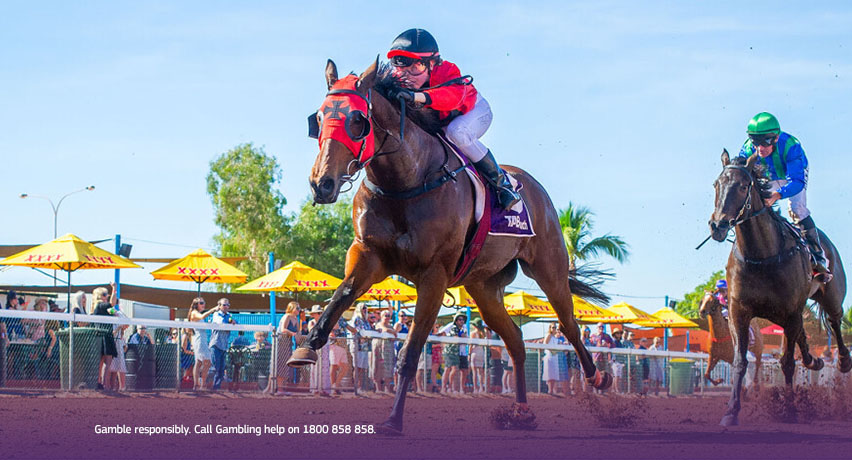 WARPIPES gives Danny (Luke) Morton a great chance to get the Broome season off to a flyer. Finished second in a 1300m maiden at Northam, a 1200m maiden at Kalgoorlie and a 1300m maiden at Northam. Most importantly has a level of gate speed to make sure he doesn’t get shuffled right back out of contention. Looks a winnable maiden for him. ZARMELLA might be the danger. She is extremely quick and should have no trouble crossing and finding the front. More often than not these maidens are won from out in front so keep Zarmella very much front of mind. PLATINUM LABEL ended up back in the field at his first start for Jim Enright. Enter Simone Altieri. He can punch forward from a wide gate and be there in the finish. IM A DREAMER might need a bit further than 1000m to find his feet.

MISS ELLMYA ran second in a 70+ at Broome first-up last preparation over 1000m. In her Broome season she had five starts for one win and four minor placings. Luke Campbell could become very popular very quickly in Broome and has been given the right leg up by the bigger stables. Miss Ellmya is a jump and run mare who looks hard to run down at the opening meeting. CITY REGAL could have something to say about it. Has won back to back races and attacks this fresh for David Harrison’s travelling team. Another who will be right up in the firing line throughout. PRINCE DEVOUTLY has his first start on the dirt. Can’t see why he wouldn’t handle it. POWERFUL is fairly fool proof. He’ll kick up underneath them and be there all the way.

ISOLA BAY looks the perfect Broome horse for Rob Gulberti. Lead throughout in a Geraldton maiden first-up last preparation to win by 1.5L over Dark Peak, then went to a 3 year old 0MWLY and wen t round favourite when beaten by My Marlaina and My Boy Eddy before heading to Narrogin and breezing and deadheating. Loved the recent trial behind 72+ winner Devoted and provided he doesn’t get crossed he should be winning. Popular. THE FINEST should be a nice acquisition for Darryn Pateman in Broome. Went close behind Powerful at Esperance in a C2. Logical danger. UNDER THE RADAR races close handy. ADVOCATOR has her first start for the new stable.

MOLTEN has been far from a punters mate over the years but his biggest asset is his high cruising speed. His 70+ 1200m win last season was over Miss Ellmya, Kennedy, Dance Cockey and Desert Thorn (many of whom he meets again here). The faster the better for him and Jerry Noske knows him well. Hard to miss his recent trial at Lark Hill and can make a splash at the opening meeting. CHARLETON EDDIE has been gifted a country rating of c83. He is a 4 year old with top class metro form. Racing below his best and first time on the dirt but if Bonnie Palise finds the front, he’ll be very hard to run down. DESERT THORN is always a danger in these sprints but always gets a long way back. SPEEDING COMET rarely runs a bad race.

PIT TO WIN won his first two races in Broome last season before going off the boil. He won a C2 1200 leading throughout and then won a 1435m C2 when working hard throughout and digging deep under 58lg to score. His recent Geraldton form on the grass was strong and he can park over the top of the speed here. Goes well fresh, goes well on the dirt and Jerry Noske has a nice book in the second half of the card. BUTTERLEA LAD is one of the more ‘exciting’ acquisitions for Danny Morton. In theory he should be a great Broome horse because he likes to get out in front and roll along. DASHING IMAGE is super consistent and has the right racing pattern for Broome. Nice pick up. PREVAILING WINDS is near impossible to catch.

MARZIPAN LAD lead them up in a 3 year old Saturday over 1400m only three starts ago and finished second to Otheroneson (beating home River Rubicon). Any sort of repeat of that performance sees him awfully hard to beat here. Has tactical speed and they’ll likely have to use it from the wide barrier but provided he gets across he should be hard to beat in the last. MOUNTAIN ASH raced consistently well with weight in Geraldton and he races on speed which is a natural bonus for Broome racing. HUSSTAR has gate speed and could nearly lead them early here. THE FIBONACCI is hit and miss.