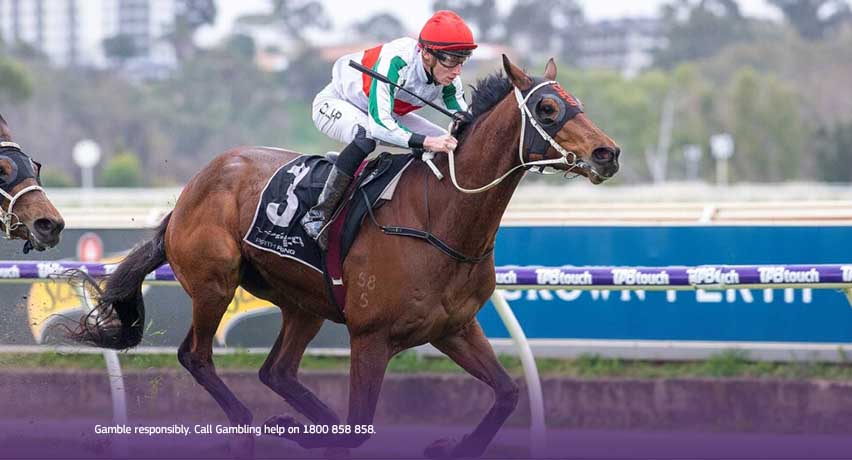 HARMIKA made her debut in a 1000m 3 year old Plate when finishing an impressive second behind talented filly Policiere. Raced wide for a fair portion of the race, dipped at the 200m and yet was still finishing off the race as well as anything. With race experience, another furlong and the ideal draw she looks awfully hard to beat. WAR GEM should settle in a similar position to where he won from first-up. Looks to have a motor and can reel off a sharp turn of acceleration. KAYMAY is produced first-up no trial and Sue Olive’s horses are flying off that preparation. The debut win at Ascot was electric. RED FIFTY THREE won well on debut but query both the time he ran and the opposition he beat.

ATLANTIS BEACH gets a wonderful opportunity to open his winning account in a maiden. Made his debut in a Class 1 when hitting the line nicely under 59kg (gets 58kg in a set weights maiden) and finishing third behind Trade War. Last weekend was thrown even into an even deeper race when contesting a 60+ Graduation and finishing fourth behind Sassy Trader (winner of his past two), Dunbar (likely to open favourite in the 66+) and Absolute. Should position up ideally from the draw and gets his best chance yet. TRADED CROWN has been narrowly defeated a number of times in these maidens and deserves to break through. HOOVER was eye-catching at his return for all the wrong reasons. Drawn awkwardly and maps sticky. OCEAN AURA kept coming on debut in an encouraging display.

THIS’LL TESTYA vs POLICIERE is likely to divide opinions for punters and form analysts. Is the 2 year old SWP and 3 year old Plate form of Policere stronger than the 66+, 72+, 78+ form that This’ll Testya brings to the table? Who leads? Lots of questions to be answered at 2pm Saturday. Siding with THIS’LL TESTYA who has shown that she doesn’t need to lead in her races to be right there in the finish. Has form around Miss Conteki, Nerodio, Gemma’s Son and Panzdown from last campaign and sizzled at trials on Monday skipping round Lark Hill in 55.78. Looks a nice race for her. POLICIERE is a beneficiary of the re-handicapped conditions to a 67+. Gets the 2.5kg pull on This’ll Testya and expecting Joey Azzopardi to find the front. Little bulldog of a filly who keeps fighting. STAFIELD IMPACT and STATE ATTORNEY clashed two runs back and there wasn’t much between them.

SPEEDY MISS has been scratched twice since her last outings while the Pearce Brothers pick and choose their races with the awkwardly rated mare. Laqdar Ramoly takes over riding duties and she maps to get the gun run midfield with cover. Is well suited to these Westspeed Platinum races and is rarely far from the winner. Always goes round an eachway price and always runs an eachway race. GINGER FLYER ran into an in form Smashing first-up in a C3. This race doesn’t look much deeper and has the added bonus of a senior rider. Can kick through underneath Justhandy to take the lead as she likes. BEAT THE BELL won an identical version of this race on 14 August and see no reason why she can’t sit back and zap them again. JUSTHANDY has hit a purple patch of form but likely has to breeze here.

COME MAGIC was returning to the races first-up no trial for the first time in 504 days when resuming in a Westspeed Platinum 58+ and running into white hot sprinting mare Wilchino. Lead them up and was gobbled up late by the emerging talent but not without a fight. Still a maiden but not for long. DEVINE BEAST broke 33 seconds her final 600 last time out when charging through the line. Will have to settle a fair way off them again. DON’S LEGACY was a bit hit and miss last campaign. If he runs to his rating from the Ducimus Crown when finishing half a length off Resortman and Weaponson he’d be nearly winning. TYPE WON finally broke through last start and is going well.

GIANT LEAP is extremely well placed by the Grant & Alana Williams team back into this 60+ Graduation. First-up won a 66+ beating Notorious One, second-up finished a luckless third behind Notorious One in a 72+ and last time out was strongly backed into favouritism when finishing second to Bad Wolf in another 72+. Drops in grade significantly and after the claim for Ramoly stays at a winnable weight. Laqdar has ridden him to victory previously and he has tactical speed to hold a position. Looks very hard to roll. KARIJINI AURORA has the inside gate, has William Pike and has the hot Brave Dream form to her name. Looks the logical danger. GLAMOUR PACKED and AL MAHALO both map ideally and racing better than their paper form suggests.

TELLEM WE’RE COMIN has the runs on the board, NOTORIOUS ONE has the most X-Factor and excitement and WESTERN TEMPLE maps to sit right over the speed after racing without luck to start his campaign. Makes for an intriguing Farnley Stakes. TELLEM WE’RE COMIN put the writing on the wall first-up in the Belmont Newmarket when sitting three deep the trip without cover, managing to collar Indian Pacific only to be descended upon by Samizdat. Last time out was unsuited from a weights perspective at WFA and did a super job to close off into another minor placing. Now back into a Handicap drops to 55.5kg and Brad Rawiller does the hard work to retain the ride. Looks a great race for him. NOTORIOUS ONE will have a stack of admirers and it is clear that he is yet to reach his ceiling. Incredible win last start and looks like going round a warm favourite. Capable of bringing eyes to WA racing. WESTERN TEMPLE hasn’t run a bad race since joining Peter Fernie and will be in the best position throughout. MEDIA BARON finished off brilliantly fresh.

DOWNFORCE looks to have landed in a nice race from a perfect alley. His effort 7 days ago can not be underestimated. The inside pad was white hot and the rail was electric: outside of the staying race 17 horses who settled on the rail filled the 24 placings (@racingrewind) and Downforce was one of the few horses on the program to make noticeable ground. Backs up off 7 days, drawn to get the right run and provided the Thursday rains don’t cause too much of a deterioration to the track he’ll be in the finish. SKINNEN TINS won well three starts ago and did all the work in the breeze last start in a high speed race. TEMPTACTION will appreciate the weight relief but may still need further. MIRACLE MAN ran well fresh but the dreaded bars are on all four.

POWER OF ST GEORGE has always shown above average ability but struggled for consistency. Loved his recent trial, like the blistering amount of speed engaged in this race (Cliffs of Comfort, Puli, Sir Snugalot, Bumper Humper) and thinking that with even luck he can chime in late at an eachway quote. Might just be ready for a breakout preparation. OUR DANNI didn’t get much room to move last start and looked to have something to offer before being blocked at crucial stages. Should get a nice run behind the hot tempo. CLIFFS OF COMFORT will have to absorb the pressure but is a beneficiary of the Ramoly claim. PULI is a fresh horse, carries weight and loves the Belmont 1200. Hard to fault.