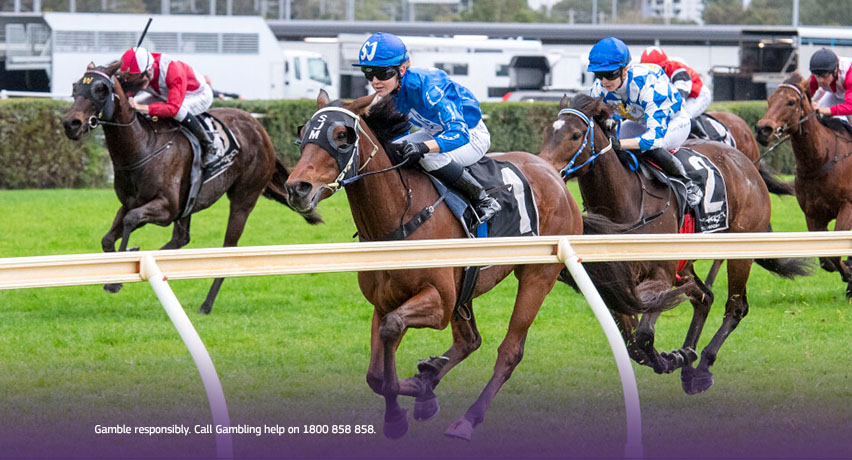 STATE OF POWER had blinkers added to gear last start and simply thrived when finding the front and never looking like being run down. Sticky draw but with speed drawn outside with the likes of City Regal and Golden Rack likely to come out running too Patrick Carbery should be able to land a nice position over the top of the pace and again take beating. THE FRONT BAR comes from a particularly high rating race and may have run into a special youngster last start in It’sarayday. HE’S A SIZZLER was excellent on debut behind Spin The Knife, a race which produced the Perth Stakes winner He’s Gold. Looked to have plenty in the tank at Lark Hill when put through the fence. SIMPLE LOGIC looks a type and won with authority in a recent trial.

OHBEEH was enormous last start when caught four deep throughout without cover. Kept coming and still loomed as a winning chance at the 150m and put the writing on the wall. Grows a leg in the wet so provided the track is still in the soft6/soft7 range he should be going very close. Drawn the outside but doesn’t look to be as much speed drawn underneath him this time and expecting Holly Watson to be aggressive out of the machine. MR MT WALKER struck a soft7 at Pinjarra, was plunged and absolutely walked in. Did a bit of work last start and may not have been suited to breezing. Ideal draw here. BLACK COMET launched at Kalgoorlie first-up and if he can reproduce on a soft track he’ll be hard to hold out. SNIPPY MISS is in form but drawn sticky.

SPEED DREAM is absolutely flying for Roland Piercey and gives the veteran trainer a wonderful opportunity at breaking back into the winner’s circle in town. Has put the writing on the wall at his last two finishing third behind Timely Outburst and Vane Tempest before attacking the line particularly impressively late beind Real Charisma, beating home Timely Outburst, Jedi Mind, She’s God To You and Alpha and Omega. From the draw settles midfield and gets the run he needs. SPECIAL VIEW is getting better and better in the care of Hayden Ballantyne and Pateman will take luck out of the equation by rolling to the top. JEDI MIND is drawn awkwardly but ridden cold and given the right track into the race can make a race of it. NOBEL LAURENCE was excellent when returning home to Deane Skipworth.

ZARATITE looks to have found his race in what looms as a battle between the Cerise and White gallopers and the top two WA yards and hoops. ZARATITE went down fighting last start behind Lonsdale Lady in a race where they skipped panels away from the chasing brigade. From the draw Pike gets the opportunity to blend into the field and wind up when he wants too. Should be ready third-up and out to the staying trip. TREASURED CROWN destroyed them last start when ridden like the best stayer in the race. Big pick-up ride for Chris Parnham as he chases the Australian Jockey Premiership. KERMAN ROCK is a head scratcher. Clearly has ability but can mix his form. SECRET PEARL reunites with Jason Brown who seems to get the best out of her.

HOT MIX is a talented 3 year old filly early in her preparation. Burst onto the scene winning at her first two career outings before running third behind La Farola and The Spruiker at her first crack at Saturday racing. Resumed down the 1000m straight at Pinjarra and chased hard in a high speed sprint which should stand her in good stead to tackle what looks a wide open 60+ 1300. SEMINOLE BRAVE goes round at a big quote after failing to handle the heavy8 conditions last start. First-up effort was good enough and is drawn a far better gate here. Keep safe. LITTLE FLIRT is showing a blistering turn of foot on the wet tracks at the moment. Hard to fault the way she’s going. PEPPIJACK was enormous two starts ago behind The Spruiker in a winner producing race.

SENTIMENTAL QUEEN is going from strength to strength and looks a mare who is poised to burst her way through the grades through the remainder of the Belmont winter. Was 63 days between runs at her most recent when matching motors with a talented and emerging 3 year old in Sentimental Hero for a large portion of the straight. Proven weight carrier, capable of holding a position from the draw and looks to be improving with racing. VITAL FLIRT and GINGER BAKER have both won their last two starts at the same meetings in alternate races but with equally as impressive displays. VITAL FLIRT likely to be ridden cold from the horror draw, GINGER BAKER likely to kick up midfield. BRAVE DREAM will be coming hard late.

NOTORIOUS ONE was one of the most impressive wins of the Belmont season to date when bolting in the run and then letting down powerfully when the gaps appeared. Watching the head on he almost went straight which is an exciting prospect for connections and a daunting one for opponents. Always going to be an element of risk when investing on a horse who can do things wrong but he won like a horse destined for bigger and better things. GIANT LEAP trialled up nicely behind Regal Power and Montelena and from the draw should almost land one out and one back in a race without a deal of tempo. BAD WOLF hasn’t had much luck this campaign and is drawn a soft alley to track up. COMES A TIME has his third run in a fortnight and is going very well.

NERODIO tackled his first listed race in the Beaufine and came through with flying colours. He ran a faster last 600, 400 & 200 than all rivals who progress to the H.G Bolton Sprint and only concedes half a kilo to main rival from that race in Amasenus. Steph Bakranich has him in career best form and from the gate Laqdar Ramoly can have him wherever he wants in a race which doesn’t have a great deal of tempo. Looks a race with an in-form sprinter taking on first-uppers who will get better over further. AMASENUS is likely to again have Nerodio within her sights and is a winner. Never gave up the chase in the Beaufine. LAST OF THE LINE and MONTELENA are both highly talented 4 year olds who look like Group horses but neither have ever started at 1200m.

CRYSTAL SPIRIT hasn’t won a race in over 1000 days so obviously this is a throw at the stumps but he did have 679 days away from the races and is a Belmont Park horse. Team Gangemi are starting to produce a few winners and in what looks a wide open, eachway the field type of sprint with speed on speed on speed he could surprise a few and will go round at double figures. Like the fact he returns first-up, no trial. EEYORE WAYZ looks to have found the most suitable race of his preparation. There are no Amasenus’, Long Beaches or Miss Contekis in this. DON’T FUSS should be suited by the high pressure conditions anticipated. AGENT JAY will need to do it from the box seat here.