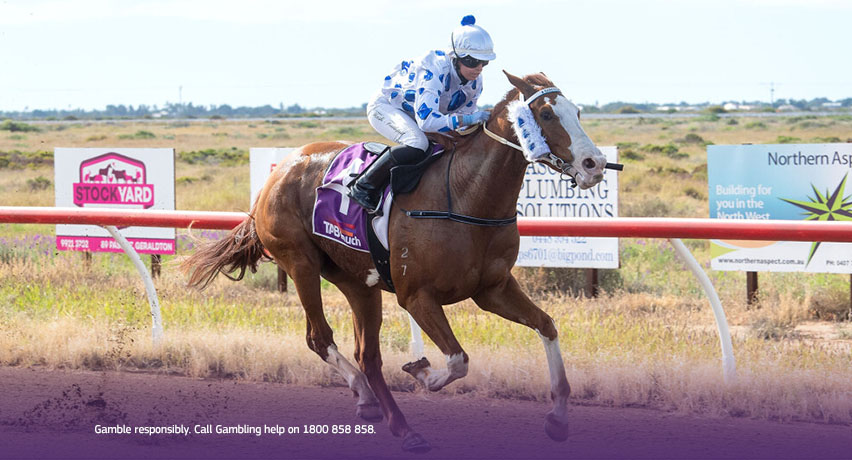 MAHUTAS has had three starts at Carnarvon and run second on two occasions. Most recently was beaten fair and square by the bolter Rebel Tail but he beat home Luna Nobel in the process and he was 45 days between runs. Should get the right run again from a favourable draw and looks hard to beat. BOBALONG BOB may need further but can sprint well fresh. PURE EXCITEMENT hasn’t been seen for over 421 days but did gallop after the last at the most recent Carnarvon meeting and looked in good order. OFF THIS PLANET improves for the outing.

ZETORIO was some sort of run in the Minilya Sprint. Missed away (which is a big cause for concern as he does more often than not), tailed off and charged to the line to somwhow finish fourth behind Mordor, Our Insider and Heritage Sash at 1200m in a 64+. Drops back to 56+ company, gets out to a more preferred 1400m and finds a very winnable race. Risky investment but worth watching. CAPE SOUNION simply had to win last start on weights and measures and just fell in after being crunched in betting. Hard to beat again but doesn’t have much to offer when the handbrake comes off. LOOKING GREAT is really hit and miss but cold well find the front in this. LAYLO an improver second start on the dirt.

CASUAL TRADE had six starts in Carnarvon last season for five wins. He is first-up no trial but Graeme Hammarquist usually brings them to the races ready to win (Passport, Unibelle etc) and he can work across from a wide gate and settle over the speed. MYSTICAL MAN is great fun to watch but he must be frustrating to train. Has all the ability in the world but boy he can do a few things wrong in his races. HONORFIC may need a bit further but no surprise to see him go well first-up. MARXAIAN was in the Minilya Sprint as a trial for prize money. Might still need one but keep safe.

THE WITCH DOCTOR is yet to win one in Carnarvon but has been really consistent. Third behind Heritage Sash & Verdigras, third behind Looking Great and Weld, third behind Human Nature and The Full Quid. This looks the weakest race on paper she has seen in recent times and love the fact that Lisa Staples sticks. SCOTOPIA is drawn wide but drops in weight and has been there abouts all campaign. MOORUMBINE looks more than capable of finding the top here and controlling the race. NOBEL TIME gets one last chance as a blow out.

BIG BLOWS is simply a different horse on the dirt as was proven last meeting. He was battling away on the grass in the provincial and country area but as soon as he landed in Carnarvon and back on the dirt he improved 5L. He’ll be hard to beat again even with the weight. NERO CHIN CHIN hasn’t run a bad race all season and Zach Tyler is putting on a clinic: 22 runners, 8 winners at 36.4% strike rate and 13% POT. SAFE TO MAKEUP is first-up at 1700m but she’s a staying type and Graeme Hammarquist gets them fit. Watch. ARMED AND READY good luck.

HERITAGE SASH won a 56+ first-up by 1.5L and then raced in a pair of 64+ 1200s since finishing 2.2L off Our Insider and Can’tcatchthis before finishing third to Mordor and Our Insider in the Minilya Sprint. Excellent placement by Sean Rains and looks a big danger to Passport. PASSPORT again steps up in distance and up in grade. He won a C1 1000 first-up, a C3 1100m second-up and now tackles a C3 1200. Toughest test to date but hard to knock. WOODBUG finally draws a gate and travels well on the dirt but is probably stretched at 1200. URBAN GIRL a watch at odds.

MAN OF THE HOUR leaves Michael Grantham and heads to Carnarvon with Zach Tyler. The way his season is going he looks more than capable of winning at his Gascoyne debut. While a long time C1 galloper he is 6 time placed in the grade and you’d naturally think the metro and provincial C1 form he brings is superior. Always a risk following horses at their first start on the dirt but he looks the right kind of animal. GILT DRAGON leaves Roebourne and heads down to Carnarvon. Beat Ginger Senorita by 3.8L three starts ago and finished third to the all-conquering Block Of Land last start. UNIBELLE was excellent in her maiden win. KING CABERNET was huge last start