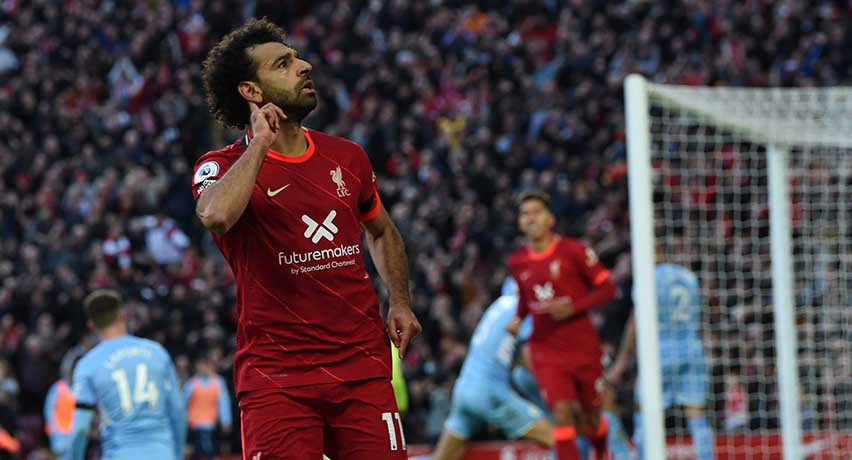 Mohamed Salah’s wonder goal, a red card that never came and Rodri’s astonishing goal-saving tackle were among the many highlights in the heavyweight clash between Liverpool and Manchester City at Anfield.

A 2-2 draw that thrilled fans, would have also pleased Chelsea, who are top of the table on 16 points with Liverpool a point behind. Manchester City, Manchester United, Everton and Brighton are all on 14 points going into the international break.

At Anfield, the home fans had to endure a nervous first half with City’s Bernardo Silva and Phil Foden particularly effective in giving Liverpool the run around.

Liverpool right back James Milner was given a torrid time, and he twice avoided yellow cards despite impeding Foden and later bringing down Silva. Infuriated City boss Pep Guardiola raged on the sidelines when referee Paul Tierney kept his cards in his pocket and Milner stayed on the pitch.

After creating the opening goal for Sadio Mane, only to see Foden draw city level, Salah set off on a twisting, turning run that left defenders scrambling and goalkeeper Ederson with no chance as the Egyptian scored a goal-of-the-season contender.

Kevin De Bruyne’s deflected shot drew City level for the second time, but the game wasn’t done. Late in the game, the visitors were indebted to midfielder Rodri, who produced an astonishing block to deny Fabinho what would’ve been a winning goal.

A goal we’ll never tire of watching. Out of this world from @MoSalah 👏 pic.twitter.com/mZEq9OI0Wx

Far from being a swipe at Ronaldo, who had been on the pitch only eight minutes before Everton equalised, Townsend claimed his celebration was a mark of respect for one of the world’s greatest players.

Having scored a 95th-minute winner for United in last week’s Champions League match against Villarreal, Ronaldo might have felt his contribution against Everton need not be so dramatic given Anthony Martial had already given United the lead.

But United needed him, or Jadon Sancho, or Paul Pogba, who were also introduced off the bench by manager Ole Gunnar Solskjaer.

Instead, Rafa Benitez’s Everton, still missing the attacking threat of Richarlison and Dominic Calvert-Lewin and enjoying just 28% possession, were good value for their point.

After Premier League defeat to Manchester City and a Champions League loss against Juventus, Chelsea were forced to dig deep to earn a 3-1 win against Southampton at Stamford Bridge, which has left them top of the table.

On paper, this didn’t look like a game that would cause Chelsea manager Thomas Tuchel too many problems given Saints were yet to win a game this season.

And when Trevoh Chabolah opened the scoring for Chelsea after just nine minutes it looked like being an easy day at the office.

But after Romelu Lukaku had a goal ruled out for offside and Werner was denied his first of the season for a foul in the build-up late in the first half, Tuchel’s frustrations earned him a yellow card.

It got worse for the home side when James Ward-Prowse equalised for Southampton from the penalty spot in the 61st minute. But when the Saints skipper was sent off in the 77th minute, Chelsea seized their opportunity.

Timo Werner edged Chelsea in front in the 84th minute before Ben Chillwell made up for conceding the penalty by scoring five minutes later.

There was a time, not so long ago, when a 0-0 draw against Arsenal would have been considered a great result for Brighton and Hove Albion.

But these are different days and Graham Potter’s side can feel aggrieved at having not earned maximum points from a game in which they had more of the ball and created more chances.

New Spanish midfielder Marc Cucurella was particularly impressive with a stirring performance on the left that had Arsenal defender Takehiro Tomiyasu on the back foot for much of the contest.

Cucurella, who joined Brighton from Spanish side Getafe this season, has featured four times and is yet to experience defeat.

The ruthless business of the English Premier League was in full swing yesterday as Watford’s Xisco Munoz became the first managerial casualty of the season.

After taking over in December last year when Watford were in the second-tier Championship, Munoz steered the Hornets into the English Premier League with a second-place finish.

And although it was always going to be tough in the Premier League, Munoz’s side had accumulated seven points from as many games to sit 14th on the table.

However, a 1-0 loss to Leeds United on Saturday was the catalyst for swift action.

A club statement declared: “recent performances strongly indicate a negative trend at a time when team cohesion should be visibly improving.”

Watford had won three (including a Carabao Cup win over Crystal Palace) and drawn one of their nine matches.

Calls for Steve Bruce to be sacked from his post as the manager of Newcastle United are nothing new. But after Saturday’s 2-1 defeat to Wolverhampton Wanderers, even Bruce sounded like a man on borrowed time.

Two goals from Wolves’ South Korean Hwang Hee-chan either side of Jeff Hendrick’s goal for Newcastle, earned the home side a second successive victory.

It has become all-too-familiar ground for Bruce, who has failed to inspire a victory from his players in seven games this season.

“Whoever you are in the Premier League, if you haven’t won in seven games, we all know the drill,” Bruce said after the loss. “We all know what comes.”

Historically, at least, Newcastle fans have seen worse starts, such as the 2018-19 season when Rafa Benitez’s side failed to win any of their first 10 games of the season, amassing just three points.

But with three points from seven games, and no sign yet of a return to action for key striker Callum Wilson, it’s hard to see how Newcastle can avoid replicating Rafa’s feat – or perhaps even worse.

The international break will give more time for Bruce to think and more time for the fans to agitate. Next up is a home game on October 17 against Tottenham, before a match against Crystal Palace, which is a must-win for Newcastle. After that, the Magpies host high-flying Chelsea on October 30.

Former Barcelona striker Luis Suarez returned to haunt his old club with a goal and an assist in Atletico Madrid’s 2-0 win on Saturday.

After setting up the first goal for Thomas Lemar, former Liverpool striker Suarez fired home a second to condemn Barca to their first league defeat of the season.

Suarez’s “phone call” gesture during his celebration appeared to be pointed at Koeman, who had told the Uruguayan he was surplus to requirements during a brief phone call last year. Suarez later denied Koeman was the target of his gesture.

The result left Barcelona in ninth place on the Spanish league table.