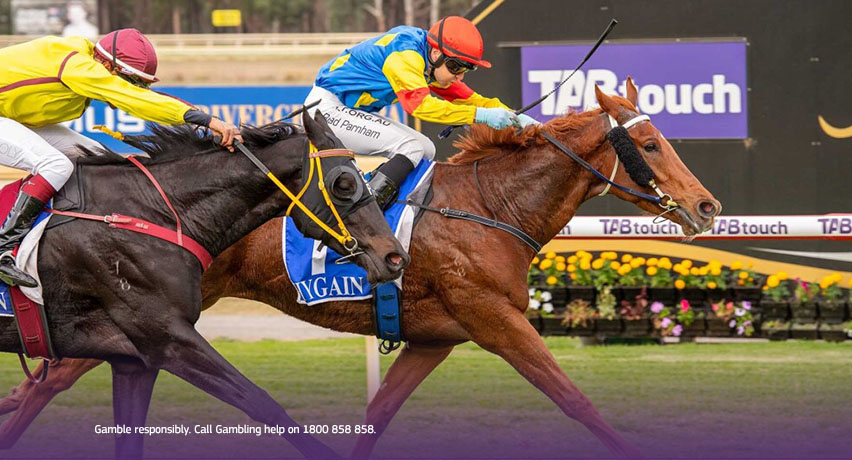 THE WHITE LINE is looking to end a frustrating run of outs for Martin Allan and fingers crossed the gelding can get the job done on return and give the yard a well-deserved boost. Only seen once when splitting Safety Fuse and Real Danger. They are both winners of better races and while he is first-up no trial we’re going to trust that he’s ready to go. ‘Wrong’ side of the Pinjarra Straight seems to be offset when it’s wet. SMILING GIRL is a jump and run 1000m straight type. She’ll fire straight on the lead and give them something to chase. WINNING PIA ran some nice races when last in work including a second to Born To Talk in a 3 year old 0MWLY. Trial was quiet. BRING THE BLING trialled up really well leading into her return to the races.

ROMANCING THE ROCK was backed into odds on at his return off the back of a nice trial victory. Was bumped on jumping, used up early to find a position, got over-racing and then was laid in on at the top of the home straight by the eventual winner and was held tight for a fair few strides in the concluding stages. Forgive, forget and follow-up as he steps to a more suitable 1400m. Won’t see a much thinner maiden than this. THE DOMINICAN ran well on debut when finishing off into fourth behind Serviceman. Looks like the further they go the better he’ll get. GARDEN QUARTZ has shown glimpses from time to time. DELTA ANNE is racing consistently but without a killer blow.

TOO MUCH TALK is becoming costly to punters. Second to On The Full, second to Magical Gem and third to Dynamic Ruler and Twice A Fortnight. Deserves to break through and this again looks winnable for him. Just a question of what price you’re getting. ON GUARD M’LADY was some sort of run on debut. Went around over 100-1 and rattled home into third behind Serviceman and Supportive. We get some sort of indication of the strength of that form through The Dominican in Race 2 and if he goes well then she should go even better. BLACKHEATH BELLE was travelling nicely behind heels from the 600 and didn’t have a lot of room to move. Think she should have finished closer. STAR IN TIME is clearly going to be a little bit hit and miss. When she turns up she has a turn of acceleration.

ETOMORP was sensational at his long awaited return to racing. Hadn’t been seen since March of 2021 at a mile and for him to rattle home into second behind Positive Impact from last at 1400m first-up shows that he’s back as good as ever. Looks like he will do the vast majority of his racing rearwards so the barrier doesn’t deter and here’s hoping that the Cartman Colours can salute. KUTSANYA ran well first-up and then slipped second-up and was never in the hunt. Keep safe. ROEY CLAM has been knocking on the door all preparation and should get a gun run. SHOTGUN ROCA is building and can sustain a run.

THUNDER OF GUNS was Lucy Warwick’s first runner as a dual licensed jockey/trainer and set a strong tempo throughout and only faded late. Think that the Dynamic Ruler, Twice A Fortnight, Too Much Talk form is handy enough for these provincial maidens and so second-up he looks hard to beat. BIRD’S THE WORD is a 2 year old taking on the older horses. The third behind Aiyza and Capricorn Man stands out and his trial was sound. ROCK ‘N’ TALES is better than what he showed last start in town. EYE OPENER was a great run on debut for a 100-1 pop. Watch.

HE’SGOTWINGS is lightly raced and clearly talented. He was first-up, no trial with Summer Dickson on 8 June and he was crunched late in betting when finishing second to Forty Niner. Summer is a genius with these tried horses, and he shouldn’t be a maiden too long. Great barrier and very winnable race. PICCADILLY ROSE resumed in a 2 year old race that should prove a strong form reference (Vampi At Play, Sentimental Belle, It’s All A Rumour, Mojo’s Luck). Danger. ORCHILLA is a long time maiden but the filly is going well. Ran fourth to Look Up and fourth to Magical Gem and Too Much Talk in her last two outings. BRIGUIER was a nice trial win and Black For Cash was popular last Thursday out of the same trial.

ABLOH won at Northam on debut for his previous stable and beat Hoover convincingly. Hoover went on to beat home Atlantis Beach and Red Hot Hope in a three way photo at his next outing. First-up off the back of two solid trial hit outs and yet another great opportunity for 3kg claimer Taj Dyson. MONG KHON how. How did he get rolled last start? End therapy session. Bursting to win a race, consistently being really well supported in betting and one day he’ll break through. In front before and after the post last start when $7.50 into $3.60. MAMA TEMBU is back in form and showed a lot of promise in her early 3 year old preparation. Building quickly towards another win. POPCORN TENDER has Paul Harvey engaged. Keep safe.

SATURN BLACK raced outside of her weight division first-up without a trial. Went around in a 60+ Graduation and finished less than 4.5L off Cold Shizzle, Multinational, False Statement, Cross Statement, Airlie Queen, Astro Warrior and Co. Second-up fitter, better suited in a C3 and drawn to get a lovely run. Big improver. SKETTA is a wet tracker and should get those conditions at Pinjarra on Thursday. Just needs luck from a tricky draw. PLEASE GOD will attend to the speed and can be hard to run down when she gets it cheap. HONEY DEW let down well from three deep cover last start to score.

SECRET STATUE had his first start for Stephen Reed at Belmont in the same race as Saturn Black in the previous behind Cold Shizzle etc, etc (refer above) and finished off really well late into fourth. 60+ Graduation back into a C3 and is suited at both Pinjarra and on a wet track. Nice race for him this. OLY’S CHOICE has had very little luck since winning on debut. He’s a progressive 3 year old with plenty of wins ahead of him. ACEFIRE ran well second-up after getting no luck at all in a 3 year old 62+ first-up. STYLAX much like Sketta in the previous event is drawn a wide gate and will need to find the right back to follow. Going well enough.