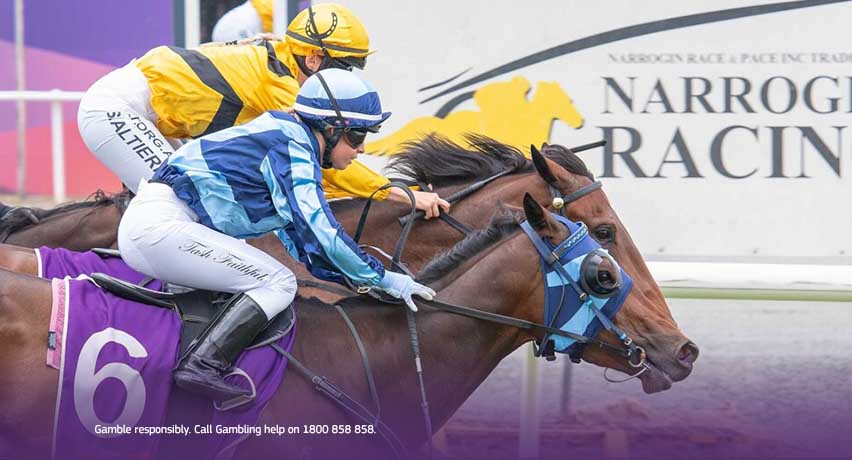 RAGING ROCKET is going super for Dave Hopperton and finds a very suitable 46+ at Narrogin on Thursday. Backing up off 7 days and dropping in grade, if he can hold a position in this race then he looks to have the form and the fire power to get over them late. Nice use of the Taj Dyson claim. IZZY MAY is a bit of a York/Narrogin specialist and she can reel off some slick closing sections for this grade of race. Just needs to hold a spot. TINYNTUFF was in the wrong race first-up. This is far more suitable and she’s a live chance. NOT A WORD could finds the front in a race without a leader.

SAX ON QUE might be an 8 year old but he and Paul Hunter’s team are going well at the minute. He is simply a different horse at Narrogin and is more than capable of carrying the weight. Backs up off 6 days from Albany last Friday, drops significantly in grade and looks right in the mix here. DOLLY EM is no world beater but dropping down to beyond the minimum for Cassey Martinan the old girl could run a race at big odds. MUSSA is a lightly raced filly and CJP returning from suspension to ride gives her the big tick of approval. THE HAITIAN POET has a big turn of foot, but gets a long way back.

FINEST CLOBBER beaten $2.90, beaten $1.80, beaten $1.85 and beaten $1.95, and yet she looks the horse to beat again here. She has been beaten in Esperance, Albany and Geraldton and now she finds herself in a maiden handicap at Narrogin. This isn’t any harder and she’s drawn to lead or box seat. One more time? HOT TONIC is kept fresh and showed a glimpse from time to time with Simon Miller. PLAY LADY PLAY is kept fresh and should get the right run. Not going too bad. MISS INTENTION ran a much better race last start.

WISE WORDS took a while to break through but she has since won a maiden at Albany, finished second to Arcadia Grace in a C1 at Belmont, won a C2 at Esperance and been run down in the final 100 by progressive mare Penny’s Afield at 1300m in a C3. 54+ back to 52+, 100 back to 1190 and CJP on. Ticks all the boxes. NIAYCHI is a hard horse to catch but on his day he can finish at tracks like Narrogin with a big burst of speed. REACTION is never far from the action, especially in this grade. SUPER TEROITOA is well placed by Colin Webster and will no doubt come across to a commanding position.

MASARU came to a York maiden handicap three starts ago and finished within a half length of the winner and since then has seemingly improved, finishing third behind Cotchin and Frech and then only 2.5L off Bambun Boy in a mile maiden at Pinjarra. These maiden handicaps are weak and she is drawn to get the run she needs. DUCHEES DEMERIT has a senior rider on and while he rockets up to 60kg he’ll be getting a soft run along the fence. HERO OF THE DAWN returns to Adam Durrant and hasn’t been too bad in Geraldton. ROYAL AWARD an improver at any old odds.

READY TO RIDE won a C5 at Pinjarra two starts ago and then finished fourth in a handy 54+ at Ascot at her following outing. The way she’s racing it seems like she’s screaming out for further and further in trip and now out to the 1720 she gets a great opportunity to prove herself. Big ride for Austin Galati and she’s an apprentices horse (all 3 wins are with 2 and 3kg claimers). THE HAWKEYE looks a massive danger. Starting to furnish into a nice provincial staying type and actually drops in grade off his last start win. Very hard to beat. HOOLAHOOPS is going super for Angela Smith but maps horribly. BLAISZEN CAZAH is a nice horse for this grade.

BLACKWATER BAY is in a rich vein of form and finally starting to fulfil the potential he showed and promised early days as the full brother to Come Play With Me. Winner of a moderate c64+ at Barker off 40 days and then a dominant winner at Geraldton of a c70+ so he will need to elevate here but he sneaks in perfectly on the minimum and he should get a lovely run for CJP in the 2nd edition of the Narrogin Cup. ROMAN FLIRT was thrown in the deep end fresh into the Grandstand Cup. Finds this easier. MAJINIKA looks to be going super for the new stable. SUPERIOR SMILE has raced in tougher than this over the last 6 months.

PRIVATE SCENE drops from Listed and Group company into a 46+ at Narrogin. This is textbook placement by Darren McAuliffe and with the shades going back on, the drop in distance back to 1900m, the ideal barrier and Clint Johnston-Porter jumping aboard, everything points to the filly running a big race. MISSALFIE bobs up from time to time and looks to be going particularly well at the minute. MAN OF THE HOUR didn’t get much luck last start when held up at a crucial stage. CHAMPAGNE GAL is well suited to this company.