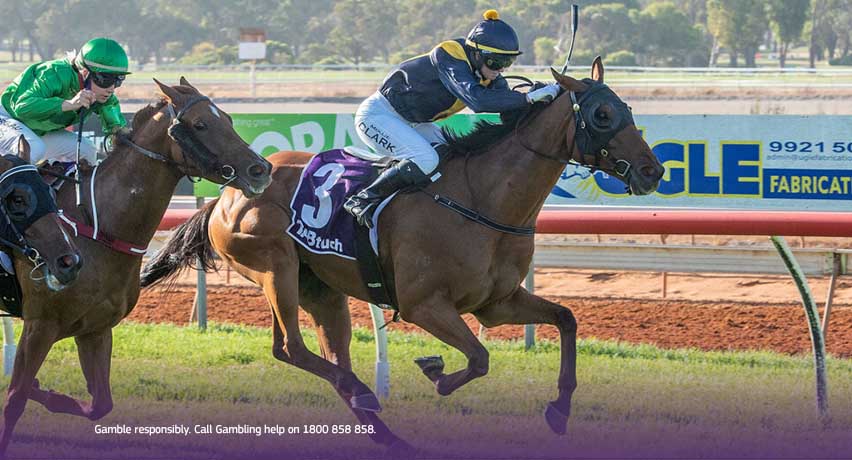 MY CONVICTION had excuses last start at Albany when tracking up along the fence and chopped out for a run at the top of the straight. Looked to have something to offer at that stage and then the race was all over by the time he got balanced. Willing to forgive and forget and follow up in another country maiden. GRACIOUS GIRL caught the eye hitting the line well at 1400m and has a senior rider added this time round. MISS EUGEN comes from a strong form race in the metro area. Should make her presence felt. LEAD GUITAR is a query at the mile but racing well.

FINEST CLOBBER gets one last chance here. Thought she was vulnerable at Albany last start coming back to the 1000 and she still ran well and chased hard. Doesn’t look anything special but seems to try hard and from the barrier Lucy Warwick can keep her tucked away behind the speed and give her every mortal hope. Now or never for her in this. BOLD PROPHET was wheeled out on debut without a public appearance for the stable and ran particularly well. Looks the logical danger. DEMERITS PRIDE returns to the races without a barrier trial. Keep safe. THE CHASER was huge last start but does a lot wrong.

DEMERITISE is going well for Mark Begg and is knocking on the door this time in. Finished in the first four at each outing this campaign including having run into Eliminate on two occasions. That mare seems to be the new measuring stick for C2/58+ form in the region and thinking from the gate Kate Southam can have her poised and ready to pounce. Nice race for her. UNDER THE RADAR has a 4kg claimer and will be looking to come out running and find a position over the speed. If she managed to lead she’d be hard to beat. THE SINGING TIGER has been given a freshen and attacks this off a 6 week let-up. Drawn ideally. OLIVIA KNOWS an improver at odds.

THE WITCH DOCTOR has found her feet for the Durrant Team and is being placed to perfection. She’s now won 4 from 15 and is only a c64 rater. 46+ win, 50+ win and now a c58+ #textbook. She showed versatility last start and a real turn of acceleration up the cutaway at Ascot. Expect Lucy Warwick to allow the speed to go (and there’s a lot of it) and save the mare up for one last crack at them. EDMOND ran well at his WA debut and gets weight relief. PIT TO WIN won well last start (Eliminate how far?) and is racing well. Newnham pair SUN POWER and FOXHOOD are always hopes in this grade.

MOUNTAIN ASH won this track, this grade, this distance under 60kg in style two starts ago and then was strong when leading them up at a ridiculously strong tempo last start under a 3kg claiming apprentice. These sorts of animals can’t run the first 1000m 5L faster than average and be able to do it at both ends. Senior on, big positive. ART ADMIRER stands out as the danger and Ryan Hill back-up horses are seriously dangerous. Going super since joining the new yard. FROSTY BELLE has hit some form and is enjoying behind ridden off-speed. BUSH ICON should track up along the fence.

SOVIET SPY came up to Geraldton two starts ago in a 58+ and won by 3.5L beating A Steamy Affair, Strong Heart, Galaxy Blaze, Proxy and Black Money. Only concedes 2kg to most of those and from the gate should get every chance under noted staying rider Lucy Warwick. Looks hard to beat. OUQBA TED returned to Geraldton last start and was back to his old self. He loves punters paradise Utakarra and he’ll win again soon. Nice Geraldton Cup horse. BLACK MONEY is an out and out stayer. If they turn it into a slog it brings him into it. A STEAMY AFFAIR rolls along in front.

SAVAGE ONE went around a well supported $1.55 favourite last start under stable apprentice Victoria Corver. Was caught wide and the winner Run For Money was able to get right away from him on straightening on a day where it was impossible to make any ground. He is drawn a gate here to sit closer in the run and looks the one capable of turning the tables on Run For Money. RUN FOR MONEY has bars going on but only rises 1kg and only meets Savage One half a kilo worse for beating him by 4.7L last start. Was whacked an almighty 11 points for winning but did destroy similar opposition. Can he repeat the dose? JAG THE JOKER is first-up, no trial, goes well fresh and is brilliantly placed by the highly astute betting yard of Ashley Maley. If there’s any money it always pays to follow. SIGNIFICANT HERO will sit last and need them to be able to make ground.